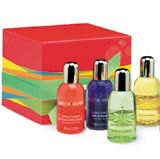 When I was 15, I moved to the UK with my family, from Japan. Putting words together became a task, leading me to find the way to express myself in art. Art then became my passion, which guided me to pursue my career in design.

Soon after joining Jones Knowles Ritchie, I was given the brief to design Christmas gift packaging for Molton Brown. It was an opportunity to create fresh graphic as well as an exciting structure. The boxes have the ribbon and the graphic reflection of ribbons wrapped around them horizontally. Undoing the ribbon reveals the Molton Brown logo at the time of opening.

This project has since become a surprise for me. When I saw the printed boxes in the shops, I suddenly recognised something very Japanese about them. I had no intention of including a bit of Japan in the design during the process. I just wanted to solve the problem in my own way. Is the Japanese influence in its simplicity, or the colours, or its essence from the sash of a kimono, or origami…? It is hard to define exactly, because of its subtle Japanese impression, which is almost ‘dissolved’ in the design.

On this occasion, I wasn’t looking for Japan, I just happened to come across it. And, most importantly, I was reminded of the excitement of being inspired by a project itself.

Memorial gets a proper Platform

University of the Arts London to hold Xhibit05

No music to your eyes