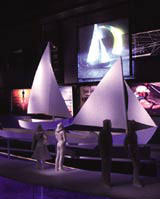 Land Design Studio is going on-site ‘in the next few weeks’ to start work on the £3.5m fit-out of the National Maritime Museum Cornwall in Falmouth.

Due to open in June, the £21m museum features nine themed galleries and interactive displays. It will house more than 30 boats on permanent loan from the museum’s national collection in Greenwich at any one time.

A ‘daylit’ gallery will form the centrepiece of the museum with room for eight boats on the ground and 25 suspended in the air. A flotilla of boats on a different theme will be re-hung every year, says Land associate director and project manager Katherine Skellon.

The building, by architect Long & Kentish, is situated on the waterfront and incorporates a tidal pool. Land was appointed ‘the day after’ Long & Kentish around four years ago.

‘We’ve had a good dialogue with [Long & Kentish] from day one and aim to develop nurturing spaces with emphasis on interacting with the public,’ Skellon says.

Other consultancies involved are Tim Gardam Associates on copywriting, Richard Glassborough Associates, ROM & Son and New Angle, which are creating interactive software, and HarrisBlythe, which is designing some of the exhibition installations.