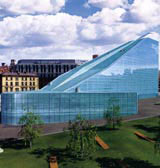 If proof was needed that the exhibition and visitor ‘experience’ sector is buoyant as never before, the proposed launch of Central St Martins College of Art & Design exhibition design MA course (DW 17 January) could be it.

A lack of young designers specialising in exhibitions prompted Central St Martins to consider setting up the course, explains Land Design Studio creative director Peter Higgins, who was approach-ed by the college’s critical context programme leader, Tricia Austin, to advise on the course.

The MA will nurture the crossover between design and architectural disciplines, as students will bring with them expertise in different subjects, Higgins says. The course will be aimed at architects, designers, curators and creative writers.

Imagination creative director Adrian Caddy agrees that cross-disciplinary skills are essential to exhibition designers, who need to be authorities on everything. ‘Architecture, art, audio, video, lighting, performance are all essential in the exhibition design mix,’ he says.

A specialist course would also teach graduates with these skills how to realise the all-important bigger picture, ‘the film director’ vision required to make exhibitions a success, he adds.

At Large partner Bob Baxter recognises the need for training in the exhibition area and says MA students will come from different undergraduate disciplines and will be able to learn from each other.

But the danger is that, in creating an all-encompassing course, students will eventually become homogeneous, ultimately lacking in specialist strengths.

Exhibitions are diverse and do not follow formula, argues Studio Myerscough director Morag Myerscough. A course attempting to distil all aspects involved in exhibition design could not do the subject justice, she adds.

She points out that her background is graphic design and she received no formal 3D training.

Caddy suggests, however, that a postgraduate from an exhibition design course would be highly employable.

The course will provide opportunities in a field which has work ripe for the picking, adds Baxter. Lottery-funded projects are coming to an end and a change in policy means the Lottery is now supporting smaller projects, he says.

‘We had expected a downturn in work, but business is thriving,’ Baxter says. The £30m Millennium Commission-funded Urbis Museum in Manchester, designed by architect Ian Simpson and which At Large is working on with Event Communications and Land, is probably the last of its big projects, he says. The design budget is £7m.

But there is a greater frequency of smaller projects, which, by their nature, require less funding. And a growth in projects leads to more work for the likes of At Large, Baxter says.

Baxter suggests another reason for the buoyancy of the sector. Museums are turning to temporary exhibition programmes to woo audiences and ‘get them through the door’. Quality, therefore, is paramount.

‘I predict a growth over the next few years in better temporary exhibitions at museums as they wise up to the need to keep consumers stimulated,’ he says.

Shorter timescales are more rewarding for consultancies, too, he adds. Ideas are sharper and flow better when the timescale for a project is in months rather than years, he says, and the momentum doesn’t dry up as fast.

At Large’s work for Urbis is now into its third year. By contrast, its designs for the British Museum’s Unknown Amazon exhibition took four months.

But with the downturn in large schemes comes the need for the smaller projects to shout louder with more imaginative, sensory ‘experiences’. They are even competing with retail environments, says Higgins.

Higgins argues that the future of exhibitions lies in more adaptable, sensory experiences to grab consumers’ attention incorporating the latest technology. For example, Land is designing a visitor experience for Famous Grouse, featuring interactive displays, as revealed exclusively by Design Week (DW 17 January). Visitors will even be able to experience the whisky manufacturing process.

But if exhibitions are not linked to a brand, they have to work even harder, he says. ‘Brand experiences’ have a ready-made ‘hook’ that sell themselves.

Higgins suggests that cities other than London have benefited most from Lottery money. Funding was distributed evenly around the country, he says, concentrating on big sites out of London where the space is.

‘Lottery funding has had a huge impact on Cornwall, for example,’ he says. Cornwall already boasts the Tate Gallery St Ives and the Eden Project and Land is working on the £3.5m fit-out of the National Maritime Museum Cornwall, which will complete the trilogy when it opens in June.

Regional cities are reaping the benefits of new museums and visitor attractions as local councils wise up to the fact that high-profile projects can regenerate previously depressed areas and attract tourists and money. Baxter cites Manchester as an example of ‘big things happening’ and East Anglia as an area on the up.

Myerscough sounds a warning bell, suggesting graduates of any exhibition-specialist course would find it difficult to get work. ‘There are simply not enough job opportunities,’ she says.

But Caddy counters, ‘[The sector] always used to be grubby, with no money or commercial viability.

‘But with the dawn of ambitious, passionate and large-scale exhibitions, and their use of techniques drawn from theatre and entertainment, exhibition design has long since surpassed the traditional concepts of the sector,’ he says.