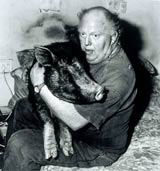 With last year’s Turner Prize a bit of a damp squib – Madonna’s speech notwithstanding – the onus has fallen on the other art prizes to deliver some serious content to the cultural debate. There are plenty of prizes jostling for attention, including the Becks’ Futures prize and the Jerwood Prize. But the gong to watch is the Citigroup Private Bank Photography Prize, and – despite its even less memorable new title – growing ever more important.

Indeed, the prize has (arguably) outgrown the sectarian divisions between photojournalism and ‘art’ photography that used to trouble it. Some may still be irked by the lack of classical photo-journalism in the Citigroup rosters, but these days there seems to be a wider diet of photographic practice, which perhaps reflects a broader remit among the judges.

And this year, it fields a strong suit of widely differing photographers – see the case studies. But if there will be any controversy this year, it will be with the work of the favourite, Roger Ballen, a New Yorker who has lived in South Africa for two decades, and whose now famous photographs of poor white farmers in South Africa have long been dubbed exploitative.

These pictures are the closest in feel to traditional photo-journalism in the set, in that they can be read as a document and commentary on the human fall-out from apartheid – albeit they locate a problem on the white side of the fence. And yet the way Ballen poses his subjects, taking great care with the form of the photograph and collaborating with the sitter to uneasy, but fruitful ends, makes them antithetical to the idea of social documentation, and brings them much closer to last year’s Citibank Private Bank prize winner Boris Mikhailov, whose pictures of Ukrainian derelicts attracted uncannily similar criticism – that is, that they were posed portraits deceiving the viewer into thinking of them as photo-journalism.

‘This is a very contemporary way of working,’ says photographer and lecturer Mark Power. ‘It doesn’t surprise me that Ballen’s work came along. Portrait work has always wrestled with the idea of giving the subjects a voice: even Annie Leibovitz, who takes celebrity portraits for Vanity Fair, has a session with her subjects before the shoot and asks them how they want to be seen. Ballen’s pictures should be seen in the full context of portraiture.’

David Chandler, a Citibank judge last year and a director of photographic gallery Photoworks, says that Ballen should be seen as a director as much as a photographer. ‘There’s a collaboration going on between him and his subjects,’ he says. ‘A casual observer might feel that they were exploitative, but if you really look at them, there’s no way you could say that the subjects weren’t participating in the act.’

The images show the farmers and their families in upfront, intimate poses: a pair of drooling twins with extraordinary features that you immediately read as inbred; a farmer clutching his pet pig; and a security guard holding a puppy. They have been lionised and compared to the great American photographer of distress Diane Arbus on one hand, dismissed as a mere freakshow on another. Indeed, some see the work in a line that goes back to photographers like Joel Peter-Witkin, who takes highly formalised, posed pictures of amputees and otherwise disabled people. ‘In a way, Ballen’s photographs are looking for dignity for these people and their surroundings,’ says Chandler. ‘They conjure up a strange power, and are disturbing. They occupy a moral terrain. But I don’t think you can dismiss them as exploitation.’

Power sees Ballen’s work – and the work of Mikhailov before him – as being part of a new, situational approach to photography that appears naturalistic, but is actually highly contrived: rather like a work of fiction. ‘In the work of Jeff Wall, you have events depicted that have the appearance of being real,’ he says. ‘Tina Barney takes pictures of family situations, using her own family, but they are all reconstructions. These photographers are challenging the orthodoxy of the documentary-type photography, and are saying that these are things that could happen, or that have happened.’ They are images that are at least as affecting and ‘truthful’ as those ‘decisive moments’ that we always understood to be snatched fortuitously on the street.

Power cites another erstwhile Citibank prizewinner, Andreas Gursky, as making enormous photographs that look as if they were external reality, when, in fact, they are heavily manipulated in the computer. ‘I would argue that they still had integrity, in that they were amalgamations of things that have been seen,’ says Power, adding that these developments were causing the whole notion of documentary photography to be breaking down. ‘Documentary purists still have a problem with this sort of thing, but I would say that most people accept that any photograph is based on a choice: what to put in, what to leave out.’

He adds that Philip-Lorca diCorcia, one of the shortlisted artists, with his new series of work, named Heads, also walks the line between the snatched social document and the highly posed artwork – a theme that grips the photographic world, and which could well prove to be this year’s big issue.

On course for a sell-out exhibition