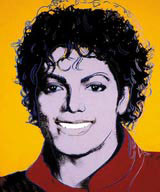 The consultancy plans to incorporate a significant audio-visual element into the project, as well as designing the physical exhibition space.

Identity and branding work is being handled by the gallery’s in-house design team.

At Large was appointed without a pitch. It was approached by the gallery on the strength of its audio-visual work on previous exhibition projects, a consultancy spokeswoman says.

Photographic and film material provided by The History Channel will be developed to offer visitors additional information about the artists involved, who range from John Singer Sargent to Andy Warhol (Michael Jackson portrait, pictured).

‘We are very interested in the possibilities of integrating photographs and film with the paintings to deepen the experience and bring a new perspective to the way portraits are seen. This is something the National Portrait Gallery has begun to explore before,’ says At Large principal Bob Baxter.

The paintings in the exhibition – of American icons from Davy Crockett to Lucille Ball – will be loaned from the National Portrait Gallery in Washington DC, which is currently closed for refurbishment. The event runs from 23 October until 12 January 2003.