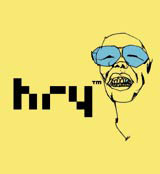 ‘Who was that?’ ‘Oh, it was nobody.’ How many times has someone said that to you? A fleeting glimpse, the back of a head or some remote voice on the phone, it undoubtedly was somebody, but somebody gone in an instant, leaving no clue.

‘I don’t want to be a somebody or something,’ says Jaz Ghotora. ‘I don’t want people to grow comfortable with who I am or what I do. The need to pigeonhole everyone in design is ridiculous, when actually we’re all creative individuals each with our own ideas.’ This cultural fascination with job descriptions jars with his take on the design world, sitting uncomfortably with his desire to create using multiple media. Hence the name, Nobody Design.

Nobody was formed in 2002. Based initially in Great Western Studios, a converted Royal Mail rail depot in west London, the company gained its first commission from the building’s owners. Nobody was asked to create promotional literature and a graphic language for a sister project called Westbourne Studios. With interiors group Gravity Design, it created a strong brand that sold the ethos of the project so well that all of the 99 studio spaces were fully let before the building was completed.

‘The promotional literature took from a motorway aesthetic, as the building runs directly under the A40 Westway,’ says Ghotora. ‘We wanted to highlight the weird urban location and so created signage, brochures and a marketing suite that were distinct but busy, mimicking the pace of life all around the building.’

Ghotora expresses the motorway aesthetic again in a separate commission for the building’s foyer. A large installation uses concrete and Tarmac, cats’ eyes and distinctive yellow lines as a conduit to direct visitors to studios within. This heavy urban styling creates a strong presence at the entrance, while within it is neatly juxtaposed with beautiful, ‘inspirational’ signage that uses images of wild landscapes as a backdrop for directional information.

In the past year, commissions have varied. Celebrity fitness instructor Simon Waterson had Nobody design a brand identity for Fit Kit, a mini rucksack containing everything you need to look like his star clients, which include Geri Halliwell and Pierce Brosnan. Trium, a mobile phone provider owned by Mitsubishi, employed Nobody to give it a new brand language, which involved both 2D and 3D design for general release and in an exhibition format.

While the experience of being based at Westbourne Studios has been beneficial for industry networking, Ghotora found that he was being labelled, purely on the strength of his work at the premises. ‘The instant association with this one project annoys me,’ he says. ‘It pushed me to create an entity with no physical existence, no specialist discipline and no boundaries.’

Nobody now exists purely on the Internet at www.nobodydesign.co.uk. Ghotora works from a number of locations including Trinity Buoy Studios in East London, Westbourne Studios and his own home. ‘There’s no need for a permanent base,’ he says. ‘When meeting a client I take them somewhere inspiring. I always ensure that the meeting is an experience. When someone is excited I can start see how to best capture their and the project’s personality.’

Nobody has a number of ongoing projects. In collaboration with illustrator Jason Stavrou, it released a clothing range in June called Hry (pronounced hairy). Ghotora explains: ‘This lack of permanence allows me to be exciting, to move in different directions. Like when I saw Ja’s vicious, edgy illustrations, I knew they’d make great T-shirt images. So, we did it.’

Ghotora’s relationship with Gravity has also been rekindled for a major interior design and rebranding exercise at Shepherd’s Building in Shepherd’s Bush. The project is the refurbishment and rebranding of the building, which has stood empty for a while, to attract new tenants from the creative sector.

Nobody’s current pet project is Storage, a shed sitting at the bottom of Ghotora’s garden. The garden itself is simple and neat, what’s within it is a piece of architectural sculpture. Two black window voids stare from deep reveals in the shed front, only they don’t: it’s an optical illusion. Clever craftsmanship and an eye for detail have enabled Ghotora to create a spectacle that holds an unnerving presence over the small garden. ‘This is what you can do with good graphic design. By using the 2D you can build a 3D illusion. It’s what I’m about, juggling skills to create the impossible,’ he says.

Storage is having the finishing touches put to its interior before being touted for photographic work. ‘I want to work in all media – 2D, 3D, architecture, photography, industrial design, even fine art,’ says Ghotora. ‘Because when all’s said and done I’m Nobody. My work tells its own story.’

Be witness to a mix of art and design this summer

Good design can only be experienced, not taught