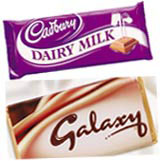 Two of Britain’s most popular chocolate brands, Cadbury and Galaxy, go head to head this summer as they unwrap revamped packaging and identities.

Blue Marlin has created the branding and packaging for Cadbury Trebor Bassett’s £8m relaunch of its flagship Dairy Milk brand and related products, which launches to consumers in August.

All Galaxy lines, including Minstrels and Caramel sub-brands, will feature caramel, cream and brown colourways, a Masterfoods spokeswoman says.

Cadbury, meanwhile, is aiming to improve associations among consumers between its Dairy Milk brand and previously standalone brands like Wispa and Caramel, which will now fall under the Dairy Milk banner. The former becomes Dairy Milk Bubbly and the latter, Dairy Milk with Caramel.

The redesigned livery extends across the entire Dairy Milk portfolio and will also feature on Cadbury Dream and Bournville products.