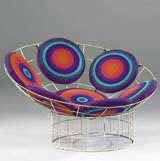 One of the few lights on show, Superstudio’s 1967 Gherpe, makes his point well: it is a bright pink, translucent plastic light with a concertina-like shell. Its name, after all, means prawn.

Andrews’ other mission is to get people into auction houses. ‘People are often afraid to go to auctions,’ he says. ‘They think if they scratch their head, they’ll end up bidding for something. We try to make it fun and friendly, and are keen that Christie’s projects a modern, current image.

‘I still think design is cheap,’ he adds. ‘The market has only really been going for the past ten years.’ He suggests last year’s sale of a good Arne Jacobsen Ox Lounge chair from 1966 for £26 000 was good value, particularly compared with art from the same period.

For the Pop Art sale, Andrews tapped many of his design sources for pieces. Contracts pulled pieces out of bags, house sales turned up real gems, and he went directly to makers. The sale was a collaboration between six departments, another first for Christie’s.

Andrews has been sourcing pieces for just under a year, and his work is all over in an hour and a half, at the bang of a gavel. Isn’t that a bit of a let-down? ‘It can be a bit traumatic,’ he concedes. ‘But auctions are great fun, they’re short, swift and energetic.’

If 1960s furniture is enjoying a heyday now, what’s next? ‘Work from the 1970s is less interesting, as Britain was in an economic crisis, so the next generation will probably collect pieces from the 1980s,’ Andrews says. What, black leather-and-chrome sofas, and executive swivel chairs? Surely not. But if you’ve got one in your lounge, hang on to it. You never know…

Italians wimp out in the blistering Euro 2004 heat