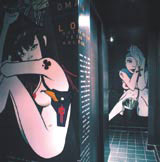 Located in deepest, darkest Soho – okay, Beak Street – Kabaret’s Prophecy is destined to be the club of choice for A-list stars, at least for a few months. If you look closely, you may spot it lurking as a celebrity backdrop on the pages of Heat and Now magazines, as famous faces stumble out of it in the small hours.

But the club’s design pedigree is unlikely to garner much coverage in such titles. Which is a shame, because a mix of David Collins’ monochromatic interior, including delicately embossed, ‘maximalist’ grey leather seating, illustrator Natasha Law’s elegant line drawings on glass doors at the entrance and a bar front studded with hundreds of Swarovski crystals make this tiny club a touch more special than the usual offering.

Lighting designer Chris Levine’s ever-changing LED backdrop, spanning two walls and various nooks, takes centre stage. Its ‘intelligent’ blocks of LEDs flicker romantically, or can be tuned to display graphics by an in-house ‘visual DJ’. Levine has even constructed a central LED system, designed to create sumptuous effects through a cloud of smoke.

Kabaret is designed to hold 100 people, which makes it a rather intimate night out. Indeed, its owners are hoping that well-heeled party animals will hire it out for the night, only letting in those few punters who are prepared to queue up.

Its snug booths, dotted round the edge of the tiny dance floor, will be the hot spots. They provide optimum people-watching potential, and each has a Collins-designed table with a pixel-style glass top – reflecting, no doubt, the LED displays.

But the real star of the show is a trip to the toilets. Gorillaz and Tank Girl creator, illustrator Jamie Hewlett, has been commissioned to create a range of new characters – ‘saucy boys and sexy girls’, according to the blurb – with curly writing snaking around them and up the walls. The drawings are lively and colourful, and the words make a change from the usual drunken scrawls found on toilet walls.

You can even text friends, with the message appearing for all to see on an illuminated display panel above your heads as you enter the toilets.

As deluxe play-dens go, Kabaret’s Prophecy is probably, currently, unsurpassed. But that’s the nature of night spots. Blink, and they’ve lost their It-status, and another has stolen their crown. But its design-led, anti-superclub, intimate and sophisticated approach could see it reigning supreme over London’s clubs for a while yet.

Creative experience inspiration on the loo

The Face of a generation