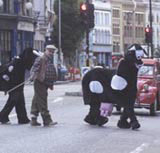 We’ve heard much about D&AD Congress at the Old Billingsgate fishmarket in London, and look forward with some trepidation to the London Design Festival in September – does the creative community have the stamina to take on the numerous events that come under the LDF umbrella? I’m going into training now!

Both of these ventures purport to ‘celebrate’ design, but are essentially geared to promoting the UK creative industries, in an ideal world to a client audience. They have their moments, not least on the fringe with the likes of the Designersblock organisors leading the proceedings there, but the business message is clear.

Interior and furniture designers still extol the virtues of the Milan furniture fair, particularly in its 1980s heyday, when art and design come together across the northern Italian city and there’s a real sense of celebration and fun in the air. The fair has become more commercial over the past couple of years to the chagrin of many more ‘creative’ contributors, but deals are undoubtedly done.

Now the London Architecture Biennale promises to rekindle some of this spirit in London. The wonderful insanity of having a load of pantomime cows parade down a turfed city street reeks of English eccentricity. And why not? What a way to open the inaugural event.

There are serious educational elements to the festival, but its energy is infectious and the message gently put. My family, including two young kids who got stuck into the many interactive workshops specifically aimed at them, enjoyed it immensely.

So come on D&AD and LDF. Let’s have a bit more fun in your proceedings. Although several of your events are open to the public and to schoolchildren, they still go on largely behind closed doors. Reclaim the streets as the Clerkenwell mob have done and let’s show the architects that design can be even more fun.

Here’s our design work and here’s our money too