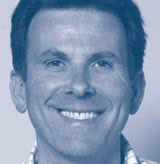 ‘Wimbledon should have a world-beating visual symbol worthy of its international status and not just an image of the old shed. A fine example would be the press box at Lords, so how about a spherical centre court using the principles of Buckminster Fuller’s geodesic dome, where the crowd could sit around and above the court. If that’s not possible just develop a technology that allows people to book the day before instead of one year ahead.’

‘Wimbledon successfully combines the modern with tradition – on-court technology at the home of the All England Tennis Club. This dynamic is not reflected in some of its current branding, which sits at odds with its world-leading image. Wimbledon’s identity should be developed to pay homage to its grass roots, while celebrating its status.’

‘Some sort of huge inflatable circus tent, amazing hi-tech umbrella, or vast hovering roof which can at an instant appear over the whole tennis village when it’s raining. Or at least design the tickets which can be used as stick-on grins so that spectators do not look so miserable while soaking wet.’