Andy Warhol’s hippy hangout The Factory was famous on the New York scene for its parties, artsy types and drug-fuelled shenanigans. And now the West London Art Factory is launching its first pop-up event to stamp its mark on the London art scene (er…minus the drugs).

Get Rolling is a one-off party special on 1 April (though this is no April fool), showcasing the work of West London Art Factory’s artists in residence and guests, including graffiti artist Inkie (Featured in DW 3 March).


The creative hub, which set up last October, will display work from 20 artists who use a variety of mix media including airbrushing, stencilling, screenprinting and illustration.


To get the party vibe ‘rolling’ there will be live paintings by Inkie, Solo One, Leeks and controversially named artist T.wat, with the opportunity to buy the artwork on show, as well as music performances from Alexia Coley. 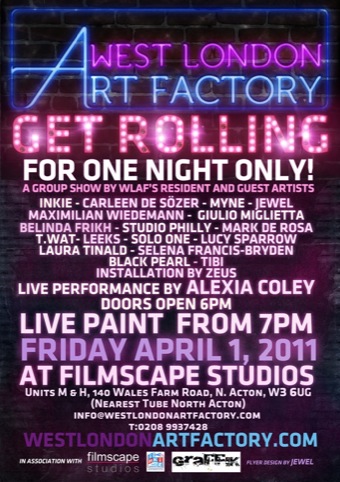