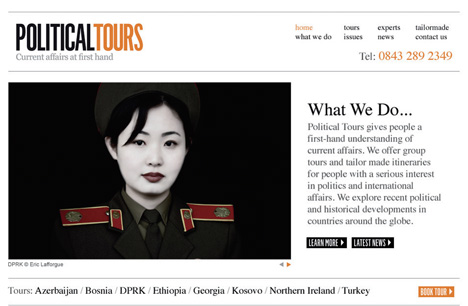 Brighton-based consultancy Wild Dog Design has created the website for Political Tours – a company that offers tours to countries at the centre of current affairs.

Wild Dog managing director Michael Hughes says the trips are aimed at clients such as universities, government officials and charities.

Hughes says Wild Dog was appointed to the work about four months ago after Wood contacted them directly, having seen previous digital work by the consultancy including the design of its own website. Hughes says, ’One of the special things for us was the photographic element of the site – we got to use really lovely photography.’

The site uses images by photographers including Eric Lafforgue and Andrew Testa.

Hughes says, ’It’s a very simple, clear site. Typographically we wanted it to look more like the style of The Times or The New York Times than travel sites.’

Wild Dog has created the complete content management system for the site, which is based on WordPress to ensure that it is easy for the client to update.

The new site launches this week.