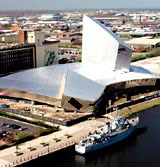 Agenda Design has created the identity for the £30m, Daniel Libeskind-designed Imperial War Museum North, which opens in Manchester in Spring 2002.

Details on the five-figure marque, unveiled this week, were under wraps as Design Week went to press. However, an Agenda Design spokeswoman says it will be “very different” to the museum’s London sister, the Imperial War Museum, which has an identity by Minale Tattersfield.

“We have created a strong identity with longevity to reflect the fact that the museum has overcome several funding setbacks,” she adds. “The identity differentiates [the museum] from other institutions.”

The identity will roll out across signage, internal communications and all graphic material. Agenda Design, which has also created brand guidelines, won the work after a multi-way pitch against unnamed consultancies.

The Imperial War Museum North is being constructed beside the city’s canal, opposite the Lowry Centre.