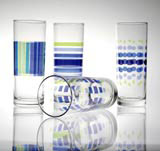 The undulating landscape of North Devon makes an unlikely setting for a crystal factory. A spate of winter floods and a macabre dose of foot and mouth have struck at the heart of this rural outpost’s image as a leisurely tourist trail of grazing flocks and cream teas.

Yet Torrington, home to Dartington Crystal, is a town more economically focused on factory production than bed and breakfast. Established in 1967 by the Dartington Hall Trust (funded by wealthy American Dorothy Elmhurst and her Yorkshire husband Leonard), it aimed to bring economic regeneration to the North Devon area.

The enlightened project hinged on “importing” a number of Swedish glass-blowers to teach the local employees the secrets of hand-made glassware. Many of those Swedes eventually settled, attracted not only to the local girls, but (as the local myth goes) also to Devon ale, freely dispensed at a time when alcohol in Sweden was heavily rationed.

Fast forward three decades and the influence of unusual foreign connections is still evident, mainly in the guise of Dartington Crystal’s new design director Simon Moore. Previously at distinguished Venetian glass factory Salviati in Italy for two years, Moore returned home to share his wealth of knowledge on the craft of glass.

Such an influx only adds to an already powerful formula. With its specialisation in uncut fine crystal, Dartington stands out within the glassware sector. According to Mintel, Dartington has increased growth by 38.5 per cent since 1995, well over the average sector growth of 16.9 per cent. It has also expanded its slice of a market populated with manufacturers such as Arc International (owner of Salviati) and the Waterford Wedgwood group.

So why was Moore approached? As one of the UK’s top glassmakers, Moore had worked with the North Devon factory before, producing the 1987 Next homeware range and, more recently, with Tiffany & Co. At Salviati, Moore was responsible for revamping lines and launched the successful “Salviati meets London” project, a series of one-off glass pieces designed by the likes of Tom Dixon and Nigel Coates, and exhibited during London’s 100% Design show. It seemed that Moore had tapped into a market where traditional glass craftmanship can acquire an extra edge when coupled with the values of contemporary design.

When his Salviati term ended, Moore found himself at a crossroads. “It was clear in my mind that I wanted to continue to work as a design director,” he says. “I like leading a group of people, exploring ideas. My background is very hands-on, but there is also an interest in industrial parameters. I was looking for a balance”. Moore decided not to go back to the solitary existence of studio production, but to embrace another challenge, accepting the post of Dartington’s design director last October.

“The aim at Dartington was to rebuild the studio and the crystal collection,” says Moore. Until he came along, the design team, composed of eight people plus a pool of freelance designers, had no design director and had been supervised by Hilary Green, who is now head designer. “Major changes had been implemented over the past four years,” recalls Green. “Dartington had introduced affordable glassware ranges to complement the handmade crystal collections. Cut crystal had taken a bit of a nose-dive, and suddenly handmaking skills were not perceived as valuable any more.” Dartington’s reply was to broaden direction, but continue to focus on its unique artisan skills, used to create the kind of detail that machines cannot produce.

The Gallery collection, a series of crystal trophies and especially commissioned pieces for the luxury end of the market, proved to be a success story in need of further development. Collaboration with high profile names such as designer Sebastian Conran and architect Nigel Coates showed that Dartington could take a slice of an increasingly design savvy homeware and giftware market. Dartington had glimpsed a direction and needed someone to lead it there.

Moore is a hands-on man. “As a design director, I cover all creative matters,” says Moore. He has weekly meetings with the finance and marketing department and a close connection with the design team. “With the team we have an informal relationship, we meet once a week to brainstorm, then everyone goes off and works on their own ideas. I try to motivate the team, throwing up constant challenges,” he says. Moore understands that his job is not “just about designing. It’s about managing, bringing people’s potential further, making it flourish”.

As with other manufacturers based outside London and major city centres, it is important to feel connected to what is happening trend-wise, whether in fashion or interiors. “It is difficult being in Devon and maintaining the inspiration,” admits Moore. “It’s so easy to shut off.” Trips to London are frequent – Moore himself is away every weekend – and books, magazines and other sources are constantly sent to colour Devon’s non-urban landscape.

The in-house designers, Green, Sue MacGillvray, Phil Chaplain and master engraver Nick Davey, all have their say in the creative process and design their own collections; Green’s Florabundance range is one of Dartington’s best sellers. The relationship with the furnace department, composed of six groups of five glass blowers, each headed by a master blower, is symbiotic. Designs are tested and coaxed through to the production stage.

Surprisingly, the in-house team has its own graphics department and is responsible for all the promotional material, from the photography to the packaging of products.

The original spirit of using local talent seems to be well engrained. Another Dartington speciality is a relationship with education, not only through a Royal Society of Arts bursary (of which Green was a beneficiary), but also with yearly placements for marketing graduates. Last year, marketing agency Precise Communications launched Dartington’s largest ad campaign, with insertions in major lifestyle and women’s magazines. Although there are no plans to bring in an external design group, the official line is that “nothing can be excluded”.

“We have to refocus the brand and redefine the parameters,” explains Moore. “Dartington represents a traditional market with a contemporary commitment to quality. We aren’t very old and we are small enough to be flexible and versatile. We are simple, not pretentious, aiming to provide design quality,” he adds. Moore is aware that sharing the brand spotlight with established names, including the aforementioned Coates and Conran, as well as Rachel Woodman, Catherine Houghs and Jane Beebe, can be a double-edged sword. He is adamant that the designers should not take centre stage. “We don’t want to lose credibility,” he says. “If there is one name that has to stand out, it is Dartington.” However, Moore’s intention is to employ more freelance designers to test out smaller ranges and styles.

Other plans include a rationalisation of the ranges – according to Moore, “They are in danger of becoming too big” – the relaunch of the Studio brand at the Frankfurt and Birmingham NEC homeware trade fairs, possibly a showroom in London (at the moment Dartington sells in the UK through leading department stores and independent retailers) and a top secret event to be staged during London’s 2002 100% Design show. So what does Moore want to make Dartington? “The Premier British Crystal manufacturer,” he quips.

2) Dartington Crystal: the core product collection of over 400 crystal gifts and tableware items

4)Designs by Dartington: a range of affordable, fashion-led decorated glassware

1994 Management buy-out of Dartington, financed by employees holding 38 per cent of the fully diluted equity, and by 3i Group, which currently holds 62 per cent

The Dartington Crystal Group and the glassware market

The Dartington Crystal Group is the leading manufacturer of handmade plain crystal tableware and gifts in the UK. It has recently become a major supplier of all types of glassware, with the addition of non-crystal glass. The Dartington collection includes wine suites, barware, bowls, vases and gifts. The Sharon collection, launched in 1971, is a bestseller and was selected in 1985 by the Victoria & Albert Museum as part of its exhibition of the 100 best ever products.

Dartington employs more than 300 staff at its production sites in Torrington and at Plymouth’s Barbican Glassworks. Last year’s turnover was £15.1m; in 1999 it was £14.5m.

In May Robin Ritchie, previously a director of the Wedgwood group, was appointed as Dartington’s new managing director. He succeded Eric Dancer, who had stepped down as managing director after 21 years with the company. ‘The Dartington brand has a unique position both in the UK and the international market. We look forward to realising its considerable potential in the future,’ says Ritchie of his appointment.

Mintel research shows that three main factors have contributed to the accelerating growth of glassware sales since 1995: Wine drinking, the purchase of flowers for the home and the current affordability of glassware items. The rise of casual dining has also lead to an increase in consumption of glassware.

There is still demand for crystal, but there has been a reluctance to buy high quality glassware and crystal and to restrict it to special occasions. In particular, the shift away from cut crystal – which is seen as old fashioned and far too precious – has dragged average expenditure down. Dartington has prospered on the current preference for plain uncut crystal, its speciality since the beginning.

Yet the glass sector has also had its victims. Last March, Ravenhead Glass and Demaglass went into receivership. Both companies were the last beer glass manufacturers in Britain, creators of the dimpled pint jug. The glass-making industry is rapidly narrowing down to a few contenders such as Arc International, the Waterford Crystal group, the Edinburgh Crystal Glass Company, Dartington and Royal Doulton Crystal.

The UK market is heavily dependent on glassware imports, from countries such as France and Italy. Ireland, the Czech Republic and Austria, where labour and energy costs are significantly lower, provide competition in the crystal market.