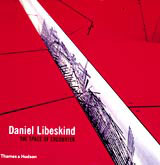 Published by Thames & Hudson, Daniel Libeskind: The Space of Encounter has no designer credited (and you can see why when you try to read it). As well as pictures of buildings, you do get lots of exciting extras: poetry, photographs of art, beautiful models, prose ruminations, segments of lectures, lots of Derridean crossings-out and word games. There isn’t a single piece of text, including the project descriptions, that begins in a predictable way. Here is an example: ‘The future development of Berlin depends on the spirit of creative imagination, the substance of which is hope and the proof of which is ethical conviction.’ You can’t read this book in a hurry.

The text is shoehorned into the stubby pages, small, closely set and justified. Instead of paragraph breaks, we get text following on and breaks marked with little grey squares. Veteran graphic designer Massimo Vignelli has said that his architectural training in Italy has lead him to see text as a kind of structure defining and holding the layout; here it is not so much structure as paint, smeared grey and evenly over every bit of white page that doesn’t carry a picture.

For such an intelligent and sophisticated architect with so much to say this is a terrible shame, as it makes for very laborious reading. I had to use a ruler to run underneath the lines, like when I first learned to read.

Frustrating, but a treasure house. Architecture has always seen itself as the senior applied art, sophisticated and complex, towering above graphic design. Although Libeskind won’t win any prizes for his book’s layout, it is hard to think of many graphic designers who could pack quite as much vertiginous learning and imagination of their own on to a little page.

Daniel Libeskind: The Space of Encounter is published by Thames & Hudson and priced at £22.95