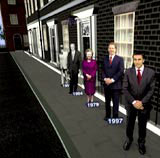 The BBC and ITV have unveiled design plans for their studio sets covering the General Election on 7 June.

The set is arranged over two floors in the atrium of ITV’s London headquarters and features a virtual-reality Downing Street and Parliament and stainless steel beams. According to Jago the design relates to the building itself, which is unusual for a TV studio set.

Marshall adds, “We will have presenters walking around the set with virtual maps of the UK flying around them.”

The BBC is revealing its election night studio on the 31 May, designed by freelance designer Christopher George. A BBC spokeswoman refuses to reveal details at this stage.