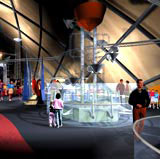 While daylight dominates Sheffield Millennium Galleries, and theatrics run riot at Magna, the lighting at the soon-to-completed Glasgow Science Centre incorporates elements of both. The centre itself consists of three interlinked buildings: a rotating tower in the shape of an aircraft wing that carries visitors to extensive views at the top; an upturned ship of an exhibition hall; and an egg-shaped Imax theatre shimmering in glass and titanium. The tower was originally designed by architect Richard Horden, but this project was taken over, along with the design of the other elements, by Building Design Partnership.

Jonathan Speirs and Mark Major have responsibility for three areas of lighting: the external lighting of the exhibition hall, quayside and tower; the interior of the exhibition hall shell; and the Event-designed exhibition in the base of the tower. A series of red LED dots, which from a distance read as a line, emphasise its slender height.

The nonconformist shape of the other two buildings meant that it was never going to be a simple job to light them, though. ‘The titanium takes light very well,’ says Speirs. ‘So we didn’t have to light too much of it.’ The Imax theatre and exhibition hall were treated as part of the same family in lighting terms and were both lit externally by plunging lights into the water surrounding them. ‘We wanted to reinforce the dock idea by uplighting the buildings through the water. You get this rippling, dancing movement of light at their base,’ Speirs explains.

NorthernLight is responsible for the top floor of the exhibition, entitled Science and View. The lighting was designed in co-operation with Netherlands-based Hollandslicht and was described by senior designer Peter Slavenburg as, ‘both interesting and uninteresting, because of the big glass faÃ§ade. At first we thought this would be a problem, but then saw it as a positive thing and treated the floor like a park’.

Natural light during the day is supported by powerful light projectors hanging from a light rail slung along the roofline. On cloudy days or at sunset there are also lampposts with specially adapted Erco indoor lights to reinforce the park feel.

The exhibits themselves also incorporate light effects. For instance, there are a number of pods – organically shaped enclosures – containing biomedical science exhibits which are internally lit with theatrical fittings. One is very red, another has a lava-lamp effect and another gleams with a metallic-looking light. The Imax theatre opened last October and the rest of the GSC is due to open at the end of May.

Dress code is a drag at the Institute of Directors