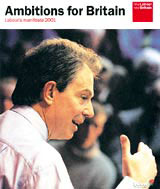 The Federation of Small Businesses must be popping the champagne corks. Last week the main political parties all put tackling the issue of small business red tape – a theme the FSB paraded before Parliament last month – in their election manifestos.

Bureaucracy is undoubtedly a problem for small businesses. The British Chambers of Commerce, the latest group to join the growing throng, estimated last week that regulations introduced between 1997, the last election, and May 2002 will cost UK businesses £15bn.

Design consultancies might be celebrating too if red tape policies are actually realised by the next Government: most consultancies fall into the small and medium-sized business class, employing fewer than 250 people. SMEs account for 99 per cent of all businesses in the country and they employ 55.5 per cent of the private sector workforce, according to the latest policy paper by the Institute of Directors, A Framework for Competitiveness: Manifesto for Small and Medium-Sized Enterprises.

Just about everyone is talking about small businesses. Last week the Conservative Party manifesto set out to appeal to small business owners with a package that promised to cut taxation and regulation for SMEs. The Labour Party countered this with its own agenda for small business reform that includes a new Small Business Strategy, launched by small business and e-commerce minister Patricia Hewitt. The Liberal Democrats’ manifesto also seizes the red tape issue for smaller businesses, and seeks to tackle the might of big corporations with anti-monopoly legislation.

There is clearly much political capital to be gained by addressing small business needs. But rhetoric aside, design consultancies new and old will have to wait and see just how the next Government acts on its manifesto pledges.

‘We will cut taxes on people and businesses and cut Government interference and regulation in order to match the competition in the global marketplace.’

Keep the pound – avoid entry to the Euro

Capital Gains Tax will be simplified, the rate cut and the ‘complicated’ system of exemptions removed

Set up a Deregulation Commission that will have the power to return new measures to Parliament if they are deemed to be inefficient. Set regulatory budgets for Government departments that will be reduced year-on-year

Slim down the Department of Trade and Industry to the tune of £1.8 bn and improve its effectiveness for business

Six months grace on benefit claims to enable unemployed people starting up on their own to test their business ideas. Income in the formative months of the business will be supplemented with employment credit

‘Neither party has really backed new enterprise and new ideas. Small businesses have to deal with an avalanche of red tape, while the utility and railway companies have been allowed to get away with far too much.’

Encourage ethical business practice – play a leading role in seeing the Organisation of Economic Cooperation and Development’s Anti-Bribery Convention, implemented world-wide. Large companies will be required to report on their social and environmental performance