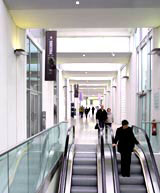 The well-mannered Millennium Galleries couldn’t be more different than mean-and-moody Magna down the road. Where Magna is all resolute hulking industrialism, darkly enhanced with strong colours, the glass and white concrete form of the Millennium Galleries picks its way through the streetscape of Sheffield with courteous elegance. Architect Pringle Richards and Sharratt has created a series of buildings that provide links and routes through the city centre, and will eventually connect to the Winter Gardens, a covered public park, due to open in 2002.

The Millennium Galleries is built on two levels and consists of a sequence of four barrel-vaulted galleries leading off an internal avenue. The vaulted roof of the Avenue is made of translucent glass blocks, which flood the space with natural light. Austrian lighting designer Bartenback Lichtlabor was involved in the project in the early competition stages. ‘It was a very close collaboration with the architect and I am sure it is the only way to do such a project,’ said Martin Klingler (who has since started his own company, Lichttechnik Martin Klingler).

Due to the large amount of glazing, light was always going to be an issue, but, says Klingler, ‘It was clear from the beginning that many different conditions had to be considered due to the varied exhibitions.’ (Which include everything from an ancient Chinese artefacts, to contemporary metalwork.) ‘Combined with unforeseeable weather conditions, it was not easy to reach a technical solution which also met the architectural needs,’ explains Klingler. Extensive computer simulations were necessary to assess each individual gallery during different seasons and at different times of the day.

The scheme involves UV filters in the glazing and a combination of sidelight and skylight openings. All openings are supplied with automatic louvre systems which adjust independently according to the daylight conditions in each area. There are also special reflectors around the perimeter of the vaults, which are carefully balanced to redirect daylight to the ceiling. This creates a smooth and gentle distribution of daylight in the galleries rather than a harsh, searing light.

On cloudy days or at night, the artificial lighting gradually takes over. Indirect components under the clerestory windows, ‘More or less replace the daylight,’ says Klingler, and are supported by spotlights. The result is that there are never any sudden transitions in brightness, either from the outside to the interior, or when a cloud passes over the sun. The Sheffield Millennium Galleries are thoughtful to the end.