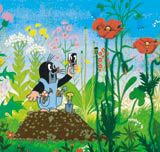 Despite political turbulence, design has flourished in the Czech Republic over the past century, producing some abiding classics. Now Czech designers are casting their nets wider, to reach a more international client base, as Clare Dowdy discovers

TO say that the Czech Republic has a strong design history is something of an understatement. Creative types from the nation, over the last 100 years or so, have been making an impact at home and abroad in fields as diverse as furniture, film, graphics and tractors.

The visual history, presented in a new exhibition at the University of Brighton Gallery, acts as a journey through the social and political changes the country has variously endured and embraced.

This is a place that has been through more rebrands than Babysham, and has had more owners than Chelsea Football Club. Before World War II, it was part of the Austro-Hungarian Empire.

During the 1920s and 1930s, the country – by now Czechoslovakia – was one of the most progressive in Europe. This was followed by German and then Russian occupation – complete with their own ideologies. The Velvet Revolution in 1989 hailed democracy and independence from Russia, and the split from Slovakia in 1992 saw it become the Czech Republic. It joined the European Union last year.

The Czech 100 Design Icons show unconsciously charts these changes through its eclectic mix of objects. In the early decades of the 20th century, the Czech version of Cubism could be seen everywhere, from buildings like Josef Chochol’s apartment block to pretty much anything by Pavel Janak, such as his ceramic box with lid and oak chair.

The 1920s and 1930s were the country’s heyday, when it was perceived as a progressive, Western nation. Brands were successfully exported. In fact, by the end of the 1930s, Bata, which was founded by Tomas Bata in the city of Zlin, was the world’s biggest footwear exporter. Product design of that era was elegant, like Ladislav Sutnar’s glass tea set and the curved metal desk lamp by Franta Anyz.

Despite the Germans closing all the universities in 1939, and the Communists then taking over nine years later, creativity and innovation still managed to flourish.

Film director Karel Zeman brought the cinema-going world the first combination of animation and live actors in Journey to the Beginning of Time. Meanwhile, the engaging animation-only character, the Little Mole, was developed by Zdenek Miller for children and still runs on TV today.

But great design in repressive times is a double-edged sword, as car designers Zdenek Kovar, Vladimir Popelar and Frantisek Kardaus discovered. The Tatra 603 limousine’s popularity with the ruling Communist elite rather tainted the model for the Czechs themselves.

Prague Spring in 1969 heralded a flurry of creativity, particularly in film. Czech New Wave, which included film director Milos Forman, was making waves internationally, with Jiri Menzel’s Closely Observed Trains picking up an Oscar – but Soviet tanks put a stop to all that.

Product design was geometric, in keeping with what was going on everywhere else in the 1960s. Hence the T56H two-tone phone, and the rhomboid ETA 211 iron by Stanislav Lachman. This was all functional stuff, and not desperately inspiring. But in a climate where consumer choice was unheard of, you were simply thankful for what you got.

And so it continued into the 1970s and 1980s, epitomised by Bota’s Classic trainers. Everybody had them, but they were cool anyway. The only variety was imports from other Soviet satellites. Things that were for the eyes of Western visitors were invested with a bit of effort – like the plush interiors of Hotel Praha.

However, once the wall came down (in Berlin, that is) and democracy swept through the former Soviet states, much attention was on the dilapidated old rather than the new. With Prague becoming a must-see destination for everyone, from culture vultures to stag nights, it was a case of brushing down its heritage.

Adolf Loos’ 1930s Villa Muller got a revamp, as did Café Slavia. But there was room for the contemporary too. Design studio Olgoj Chorchoj found itself on the international design map, and DesignBlok, an annual festival, was launched.

But designers found life a struggle. Many of the state-owned companies were closed, so their client base was eroded. Others were bought by international businesses, who may not have appreciated or even recognised the home-grown design talent.

Czech 100 Design Icons is showing at the University of Brighton Gallery, Grand Parade, Brighton, BN2. It runs from 25 November to 30 December

It’s a sign that there are plenty of local style-aware punters when a market can support, not one, but two, design magazines. As well as Dolce Vita, a blatant copy of Wallpaper magazine, there’s also Blok, which is a more original affair.

Yet, despite this strong appetite for creativity, designers actually working in the Czech Republic suffer from a dearth of clients and manufacturers. It’s fine if glass is your thing, as there are still plenty of Czech glass-makers. This has fuelled a new generation of glass designers, such as the country’s most internationally renowned design studio Olgoj Chorchoj, with its tube candelabra, and Rony Plesl, who created the cut-glass uranium Uran Vase.

But other disciplines are less well-catered for, as either local companies bring in a foreign ‘name’ or believe they can get on fine without any designers at all.

Olgoj Chorchoj co-founder Jan Nemecek contrasts the current situation with that of Italy in the 1970s. ‘There was no work for Italian architects, so they started to do design. Czech designers, on the other hand, do architecture, advertising, graphic design, anything,’ he says.

This is certainly the experience of Barbora Skorpilova. She trained as an architect, but as a young graduate started off designing jewellery. Since then, she’s set up design group Mimolimit, which has been responsible for the interiors of a number of Prague’s stylish eateries, such as Zaharada v Opere, and the interiors of the city’s new Holiday Inn.

It seems as if Czech designers are facing the same difficulties as those in the UK, with virtually no local manufacturing base. But even if they have to look elsewhere for work, or for clients, they are well qualified to do so. Pretty much everyone doing anything even remotely creative is a product of the Academy of Applied Arts in Prague, which has a strong reputation internationally.

In fact, according to London-based Czech architect Eva Jiricna, who teaches there, ‘the academy students have more to offer than UK students because the overall quality of education is higher’. UK credentials still count for something, though, and a British consultancy will get a good reception, particularly from brand-aware clients.