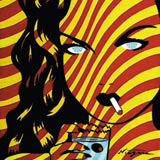 An exhibition of what is described as Urban Vinyl, Pop Surrealism and Low-Brow Contemporary Art runs at the Richard Goodall Gallery in Manchester from 22 November to 14 January 2006. Pictured is a poster by Detroit artist Niagara, whose work will feature in the exhibition.

Love has designed Shoegazing, a book to promote the launch of Umbro’s new range of football-themed trainers. The book of photographs will be sent to fashion and style publications nationwide from December.

Scottish textile design group Timorous Beasties has created a series of window displays for The Wellcome Trust headquarters in London. Reflecting the trust’s work on the human genome and malaria, 48 lamps feature tsetse flies, germs, syringes, veins and human foetuses. Unveiled next Monday, the displays will remain until autumn 2007.

The on-screen brand identity of Hungary’s first entertainment and celebrity TV channel, 4!Storytv, has been created by London

design and branding consultancy Kemistry. The channel launches next month on cable and satellite.

Door 22 has designed the identity for Brighton-based Little Beer Company, exporter of British bottled beers to bars and restaurants in the Costa del Sol.

Peter Rankin Design has launched the Saturn and Moon towel rail and radiator. Hidden valves and controls, as well as concealed wall fittings, give the radiators a ‘floating’ appearance, says Rankin.

Wiltshire group Origin Design Consultants has produced a calendar in support of 12 UK charities, featuring work by a host of illustrators. The calendar is designed by Origin designer Nathaniel Warren.