Twitter has revealed a new visual identity which hopes to “fully reflect the complexity, fluidity and power of the conversations today”.

The new work comprises imagery, typeface and animation and has been carried out by Twitter’s internal creative team in partnership with design studio Irradié.

The far-reaching identity work, which does not include a new logo, will roll out over videos, posters, presentations, GIFs and banner ads as well as appearing across the product.

We felt the brand expression we launched 5 years ago didn’t fully reflect the complexity, fluidity and power of the conversations today.

So the team embarked on a unique challenge: to build a creative system for an iconic brand that’s complex and imperfect, by design. pic.twitter.com/CZ6KY3cNqw

According to Twitter’s chief marketing officer Leslie Berland, the previous identity “didn’t fully reflect the complexity, fluidity and power of the conversations today”.

“The conversations on Twitter are messy and complex, intense and inspiring, hilarious and ridiculous, weird and ugly, shocking and beautiful, disturbing and moving,” she adds, in a thread published on the platform.

The new creative system had to meet that “unique challenge” and create a flexible brand system, Berland says.

Focusing on Twitter’s users was key to the design process, according to Berland. “We started with Tweets at the center,” she says. “We then tore stuff apart and layered over again.”

The result is a layered identity – incorporating paint splatters, ripped up posters, scratched out words and faded images.

With a nod to the platform’s viral moments, the team also used memes in the new look, combining traditional textures with modern references. “We added textures and pixels, movement and memes,” she says.

While the bird logo is unchanged, the design team will be “playing around with how it shows up”, Berland adds.

A new typeface has been designed in collaboration with Swiss type foundry Grilli Type. Chirp is “flexible and expressive, bold, agile and fun”, Berland says. It aims to “reflect the voices that make Twitter, Twitter”.

Twitter design director Derrit DeRouen says that Chirp introduces a “humanist character” with “international sensibilities”. According to a thread posted by the designer, it was seen as a balance between American Gothic and European Grotesque fonts.

DeRouen notes that Chirp is the platform’s first propriety typeface. While type is the “foundation of Twitter”, the company has always used someone else’s type – Helvetica Neue in the brand, for example.

“Regardless of whether you’re pro or anti Helvetica, I think we can all agree that it’s not up for the job,” DeRouen says.

It is uncertain whether Chirp will also replace the typeface on the product itself, though DeRouen says that it’s his “personal desire” to see this happen. Work on legibility, density and weight has begun, according to the designer.

“There is more refining to do, more languages to build, but the hard work will be worth the benefit of having a holistic brand,” he adds. 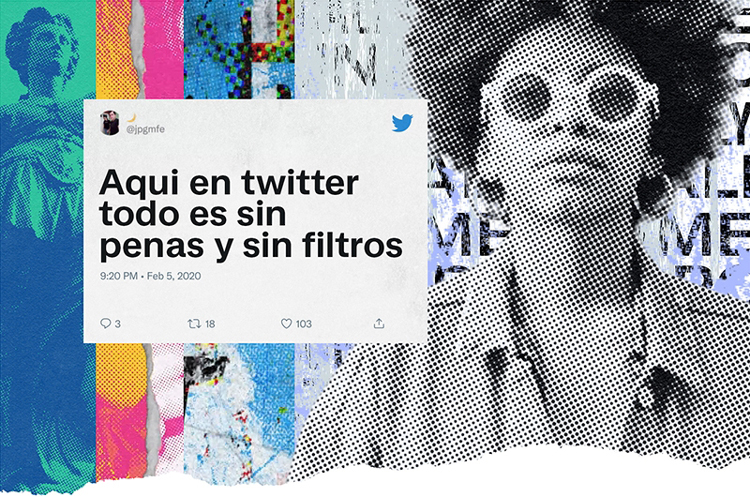 Twitter has had an eventful year, with many criticising the platform for contributing to the spread of misinformation during the pandemic and the aftermath of the US elections.

At the start of the year, the platform permanently suspended outgoing president Donald Trump for inciting violence following the storming of the US Capitol.

This week, it introduced Birdwatch, which is a “community-driven approach to addressing misleading information”, according to the company.

Currently in a beta phase, the feature will allow users to add notes and “helpful context” to tweets that appear misleading to people.

What do you think of the Twitter’s identity update? Let us know in the comments below.

Dan Perri: the designer behind your favourite film