Nissen Richards Studio has designed both the 3D elements and graphics for a new Natural History Museum exhibition, called Colour and Vision: Through the Eyes of Nature.

Based on the use of colour in the natural world over the last 565 million years, the exhibition explores how – without vision – evolution wouldn’t have happened in the way that it did, according to exhibition designer at Nissen Richards Studio, Sophie Mitchell.

“The Cambrian explosion was when the eye evolved, which then led to huge diversity in the natural world,” says Mitchell. “Our brief was how to get that across as an immersive experience.”

Nissen Richards Studio designed the exhibition around the concept of a “journey of discovery”, Mitchell says, starting out in a dark room with out-of-focus surroundings that reflect a lack of vision, before moving through into much brighter zones in order to reflect this transition.

Using more than 350 specimens from the museum’s collection – ranging from brightly coloured birds to fossils of the first organisms with eyes – the exhibition shows how the use of colour in the animal kingdom became the difference between life and death.

Four main zones included in the exhibition cover subjects such as sexual attraction, warning, deception and camouflage. Highlights include a light installation created in collaboration with British artist Liz West, which uses dichroic glass, and a Victorian-style tower filled with brightly coloured taxidermy.

“Our approach was to use a white-on-white, or black-on-black backdrop so that all of the colour in the exhibition was just coming from the specimens themselves,” says Mitchell.

Details such as the wing of a Blue Morpho Butterfly – which reflects light in a particularly way so that it shimmers – are carried through the rest of the exhibition itself, for instance in graphic lettering and on physical panels.

Another consultancy, Krow has created an outdoor, press and digital marketing campaign to run alongside the exhibition. Representing a chromatic explosion, the campaign is made up of an array of colourful specimens arranged into the shape of an eye, to create a visual representation of the showcases.

Colour and Vision: Through the Eyes of Nature runs from 15 July – 6 November 2016 at the Natural History Museum. 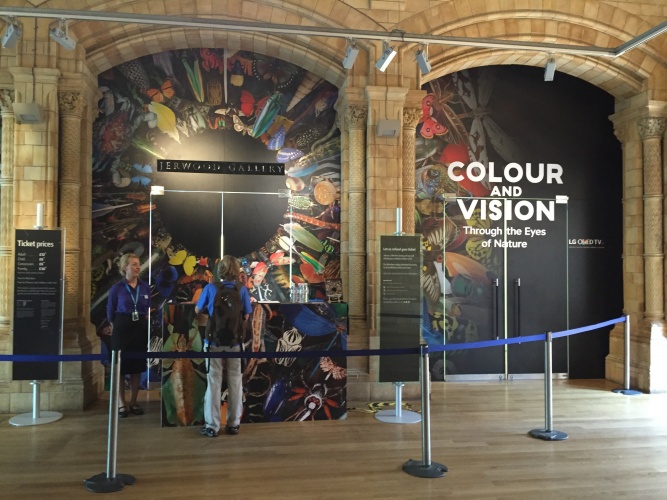  How to ensure steady growth through recruitment