The Glasgow School of Art has announced Professor Stephen Bottomley as the new head of its School of Design. Bottomley is currently head of the Birmingham Institute of Jewellery, Fashion and Textiles. He takes up his new position in January 2022.

Frankie Guzi has been appointed new business director at BrandOpus where he will work on the UK portfolio. Guzi was previously senior business development manager at Jones Knowles Ritchie, and has worked with clients including Nike and Converse.

Tom Dixon Studio has promoted Helene Bangsbo Andersen to managing director of the studio’s research division and creative director of its spaces and brand department. Anderson joined Tom Dixon in 2006 as an interior designer and set up the research studio, which oversees forward-facing products and spaces.

Production studio Happy Finish, which works in content design and immersive storytelling, has announced Jeremy Yates as its director of strategic partnerships. Yates was previously at mixed AR and VR studio Zappar. In his new position, he will work with brands to create immersive solutions, from connected packaging to the use of AR in retail. 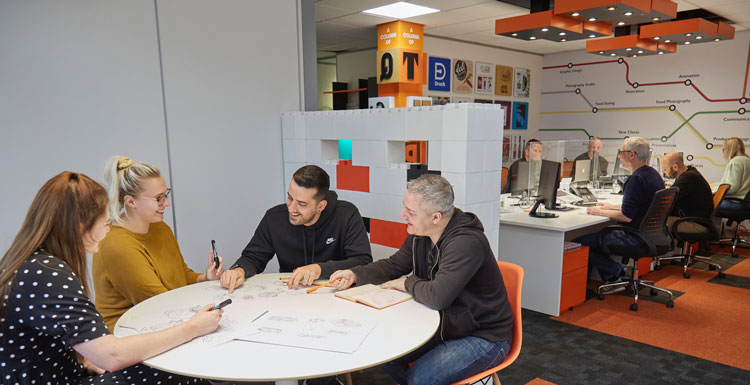 STB Graphic Designers has announced that it will become an Employee Ownership Trust (EOT). The studio began as Stocks Taylor Benson in 1988, and has worked with brands including British Airways, Virgin Trains and Next. Founding partner Glenn Taylor is now transferring 90 percent ownership to the employees in the hope of cementing the business’s future. “We are placing [the studio] in the hands of the people who have helped it grow over the last 33 years and enabling them to share in its success,” Taylor says. He will continue as CEO.

Nottingham City Council has granted planned for a new art and design building for Nottingham Trent University. The building has been designed by architects Hawkins Brown and wil feature a mix of teaching facilities and publicly accessible spaces.

The Glasgow School of Art (GSA) has revealed the outcome of the consultation process over the future of its Mackintosh Building, which was damaged severely by fires in 2014 and 2018. The consulting team advised that the best option would be to “undertake a faithful reinstatement” of the building while also updating digital touchpoints and making sustainability a priority. This option will now be considered. The project’s director Professor Penny Macbeth notes that GSA is “one of the only three UK Art schools to consistently rank in the top ten of the influential QS world rankings for Art and Design” and that the Mackintosh Building is synonymous with the school’s teaching.

If there have been any moves and changes at your consultancy, please email henry.wong@xeim.com