Multi-disciplinary consultancy Map has worked on a conceptual project for Honda, which reimagines “one of the longest routes of human migration” but with specialist autonomous cars.

Map has looked to show how seven specialised autonomous vehicles might take passengers across the Globe from Nairobi, Kenya to Manaus, Brazil.

Honda Great Journey places autonomous driving in the context of travel for pleasure, adventure and discovery rather than safety and efficiency.

While Map was originally tasked with designing one vehicle that could handle all types of terrain along the journey it came to design a family of vehicles that could tackle everything from valleys to mountains, road to sea and snow to desert.

Marshall worked with Morihiro Harano, founder of Mori Inc. and creative director on the project. The pair of them visited the Honda Collection Hall in Japan for inspiration.

The concept cars are based on autonomous technology, fuel cell and solar power systems as well as products like the ASIMO humanoid robot and UNI-CUB – a personal mobility device featuring Honda’s proprietary balance control technology, and an omni-directional driving wheel system.

Sketches and models were developed in 3D CAD. They are designed to be lived in and slept in as well as travelled in. Map collaborated with Universal Design Studio on the interiors of the cars. 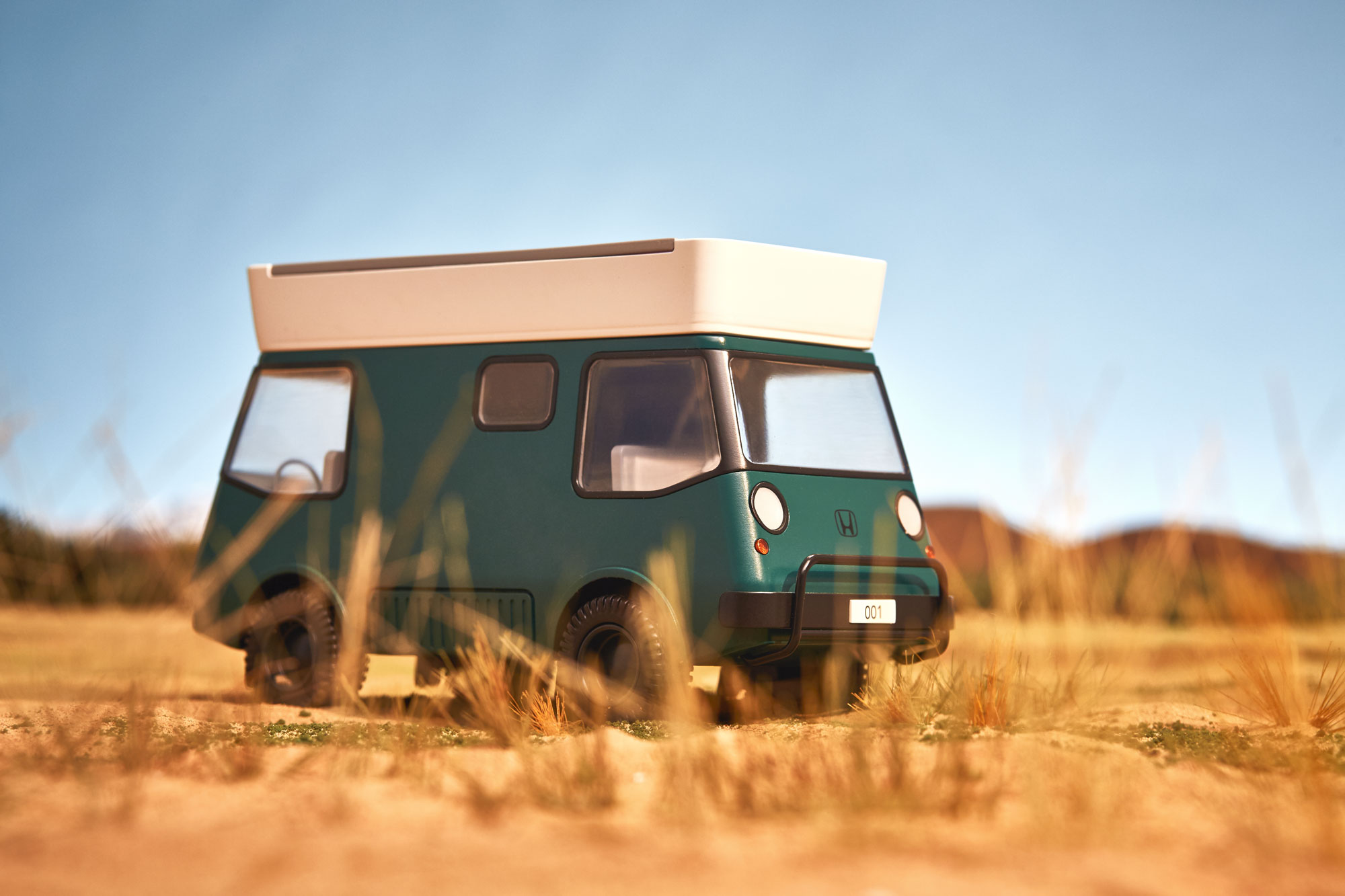 Taking passengers from Nairobi to Khartoum, the Safari Drifter is designed to travel along a route dominated by savannah landscapes, where there are also many animals to see. Map’s design is based on the classic camper van.

Honda’s robotic lawnmowers have inspired the design and help the vehicle cut a path through long grass and track animals.

A sheltered canopy above the vehicle has been designed so that occupants can look at animals safely. 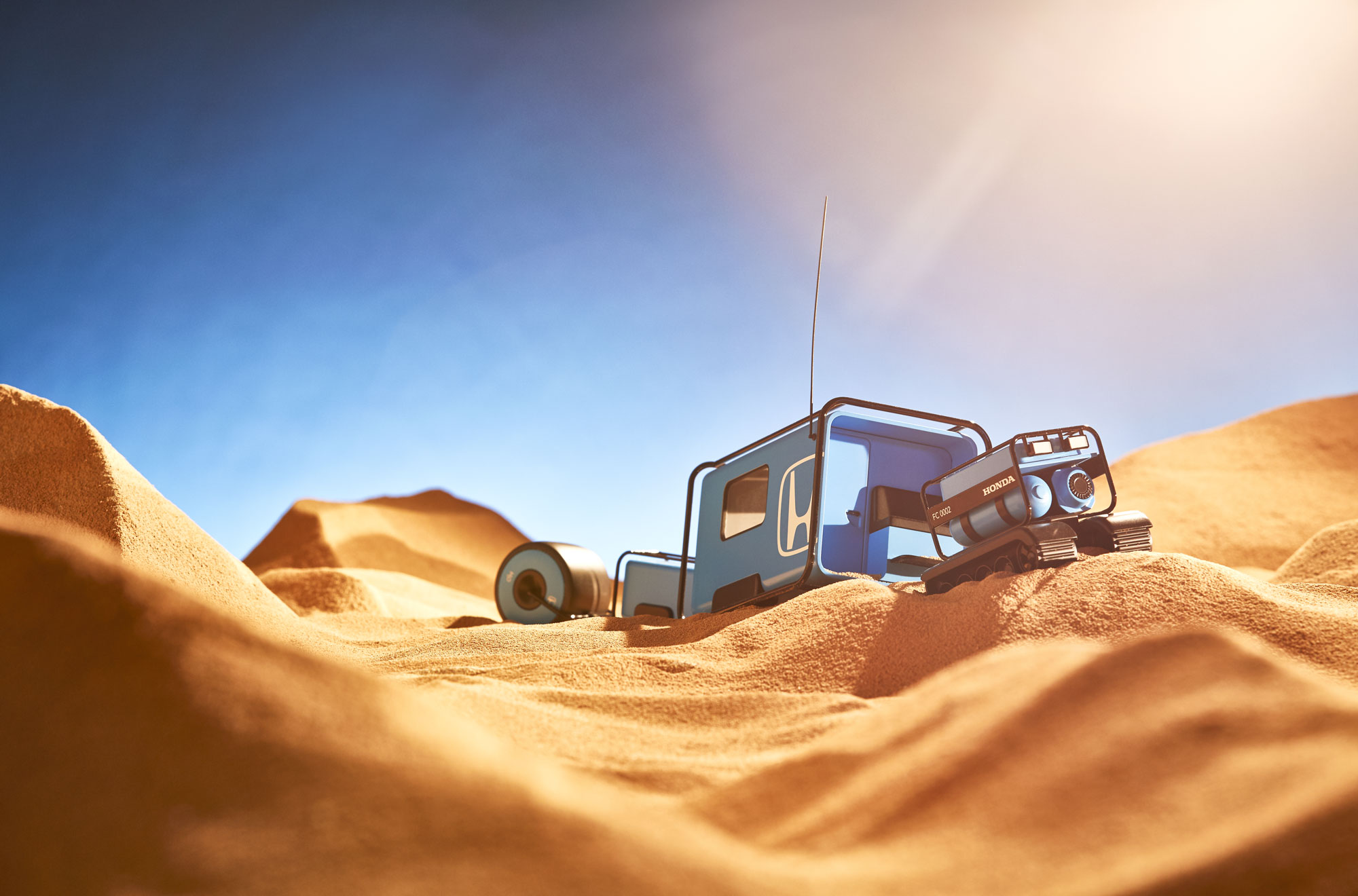 This vehicle is powered by Honda hydrogen fuel cell technology and runs on caterpillar tracks.

It is formed of several components, which make up a small cavalcade, much like desert camels.

The hydrogen fuel cell technology produces excess water, which can be stored and drunk.

Each section is fitted with a roll cage giving it a ruggedised look inspired by Honda’s four stroke generator. 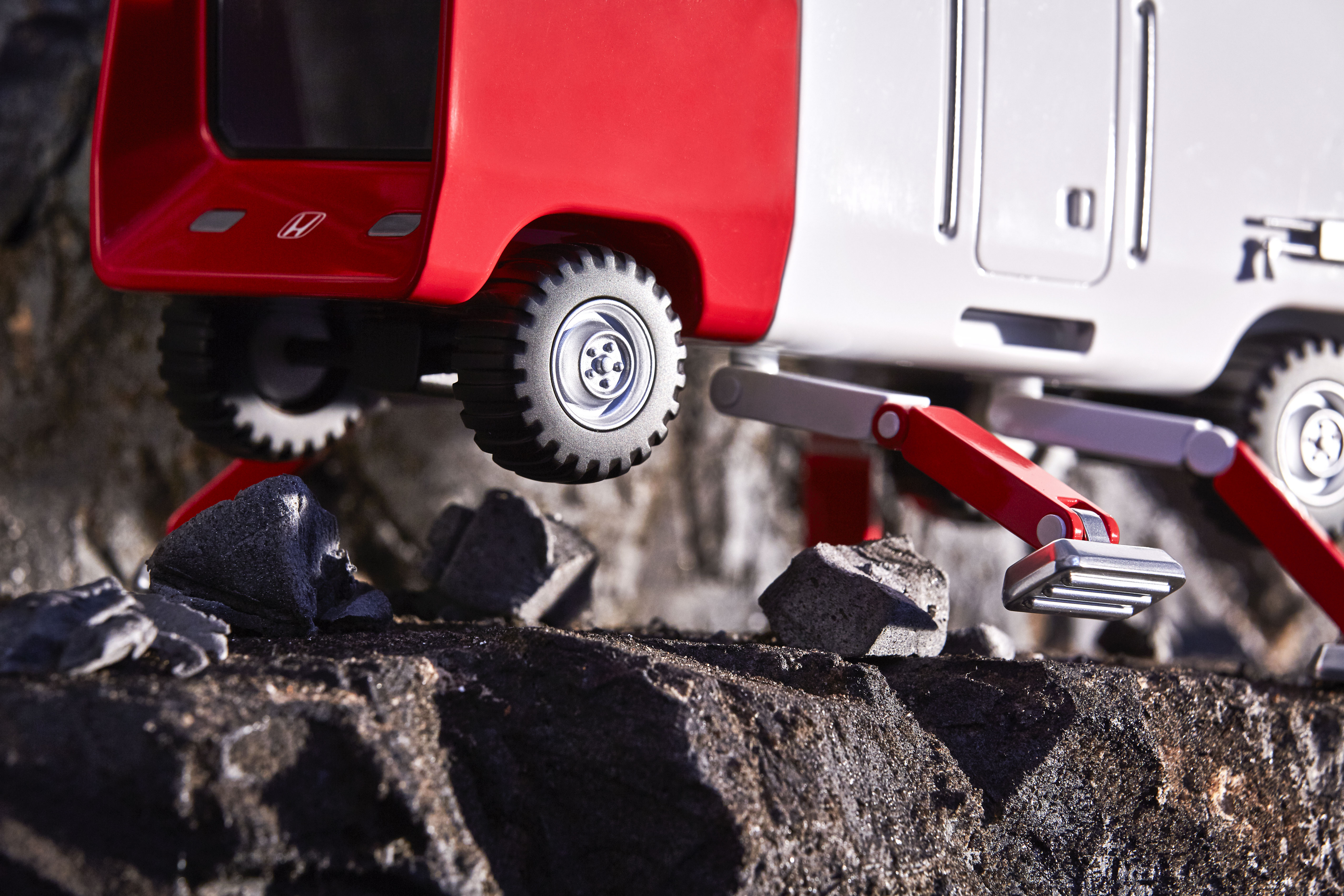 The Karachi to Shenzhen route would take passengers through the Himalayas along treacherous roads. Map has designed a vehicle with high ground clearance.

The vehicle has an extruded form with unobstructed ends to give clear views. Inspired by Honda’s ASIMO robot, robotic legs deploy in the event of landslide so that the vehicle can safely negotiate the rocks and debris. The robotic rear arm includes a digger bucket for helping to repair the road. 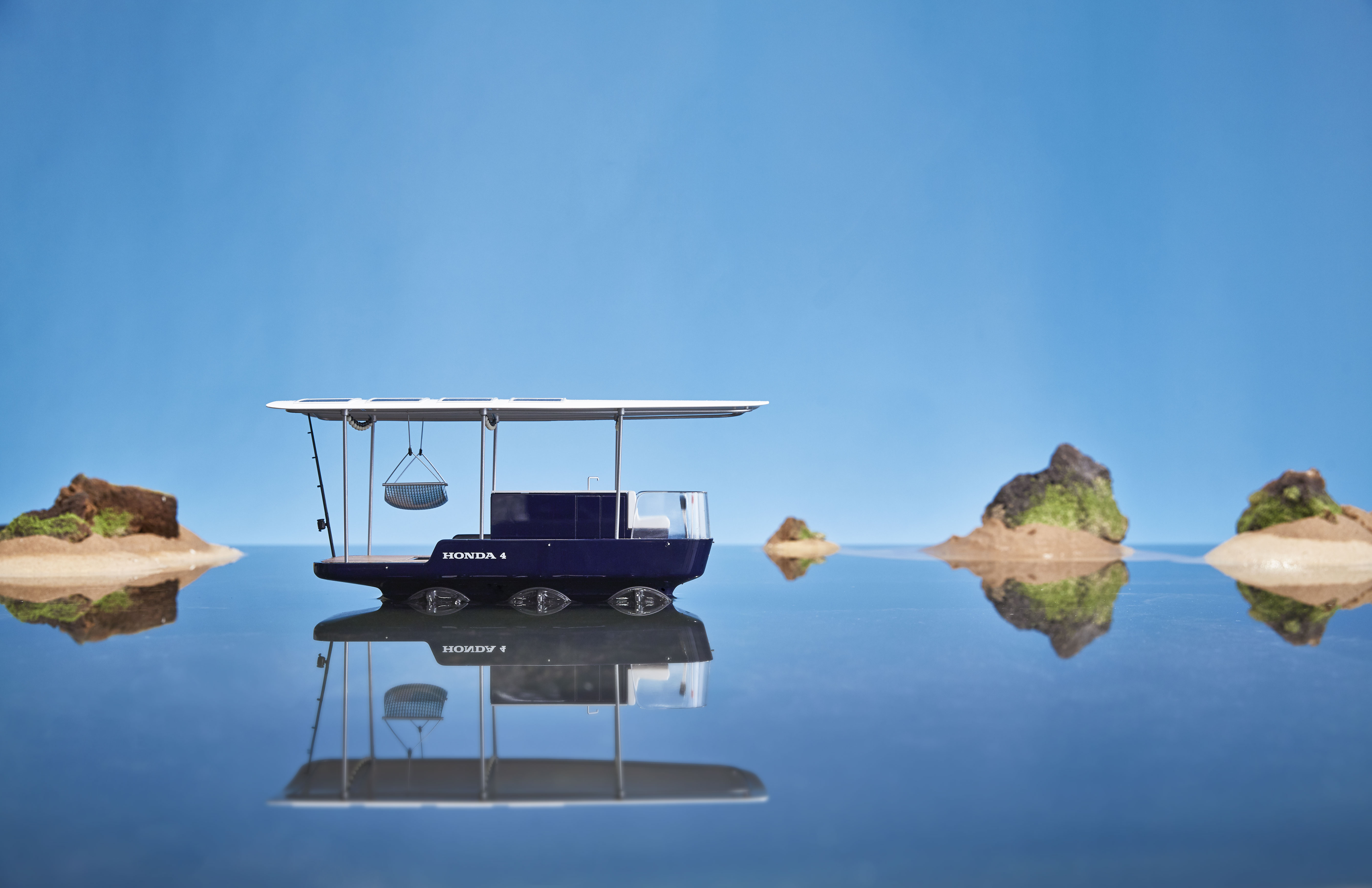 The Island Hopper takes passengers through Japan and across the Southern tip of the Russian peninsula Kamchatka, so Map has come up with an amphibious vehicle designed to navigate land and sea.

Part pedalo, part luxury yacht, the hull will sit just above the water while the six paddle wheels paddle it along. It is powered by solar energy and once on land the left and right wheels can be operated separately to negotiate any terrain. 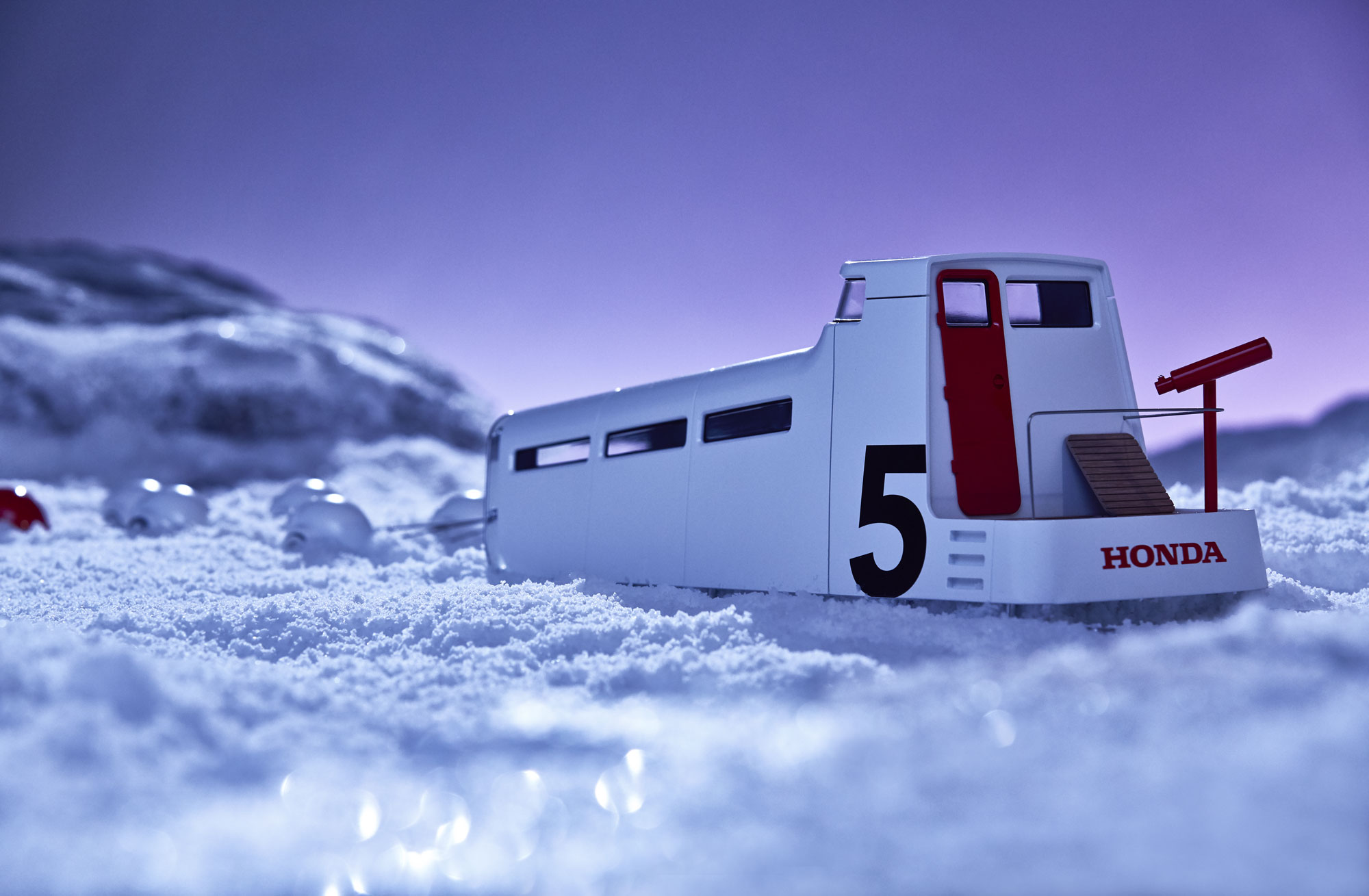 Combining the traditional dog sled with the Honda UNI-CUB is the Tundra Sled. The six powerful drone wheels pull the sled along as well as sense any cracks in the ice. The sled’s runners are attached to the body of the vehicle, which resembles a wooden sled. 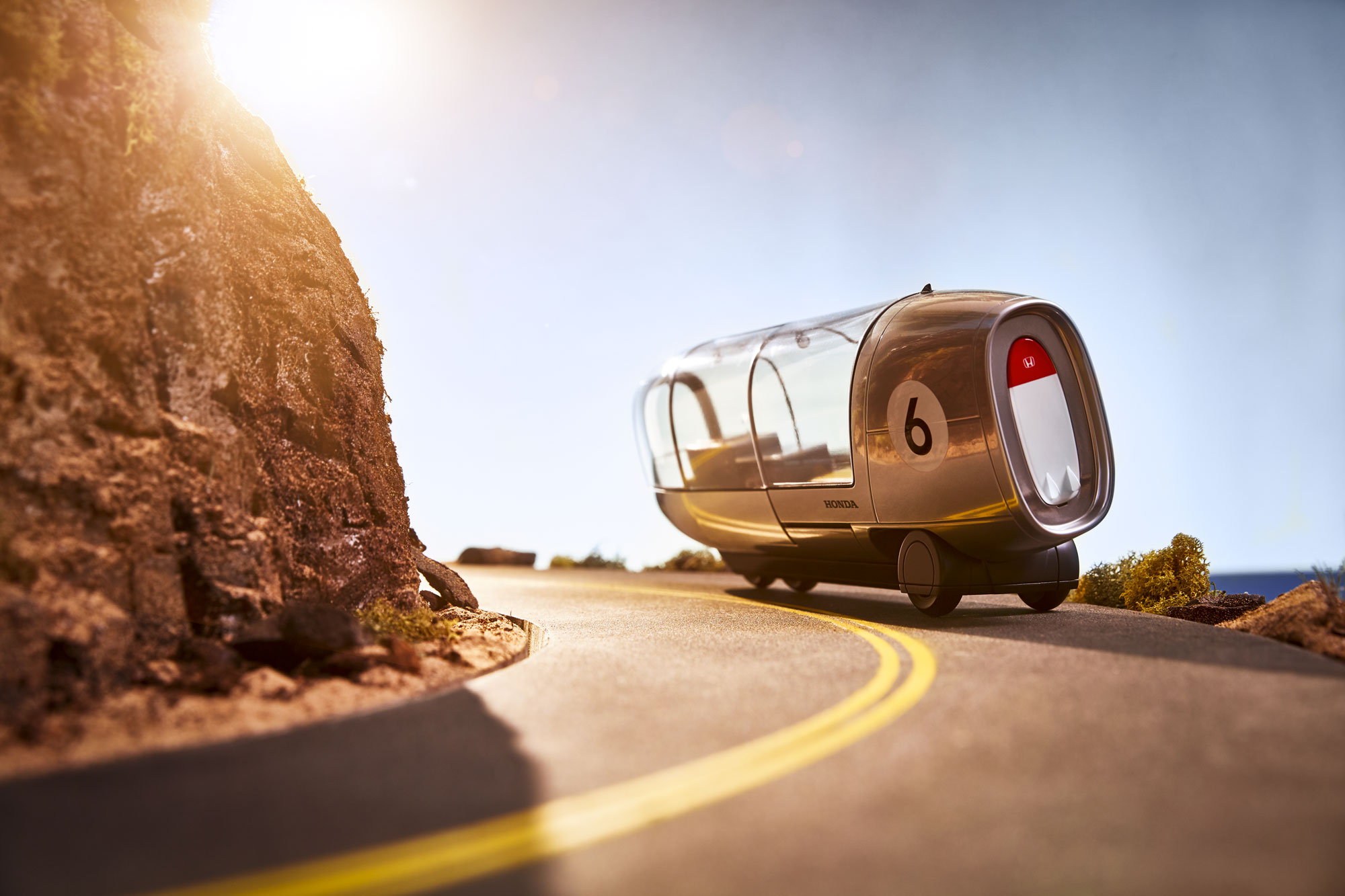 On the way to Mexico City from Fairbanks, man-made roads mean the journey moves south along the West Coast of the US. Inspired by glass roofed American trains and the metallic Airstream caravans, Map designed the Road Tripper with large glass panels that wrap over a stainless steel tube.

Panoramic views are offered from the comfort of a sofa. Map included references to Honda’s Daytona motorcycle by utilising the graphic language of the 1960s with a racing number on the side of the vehicle. 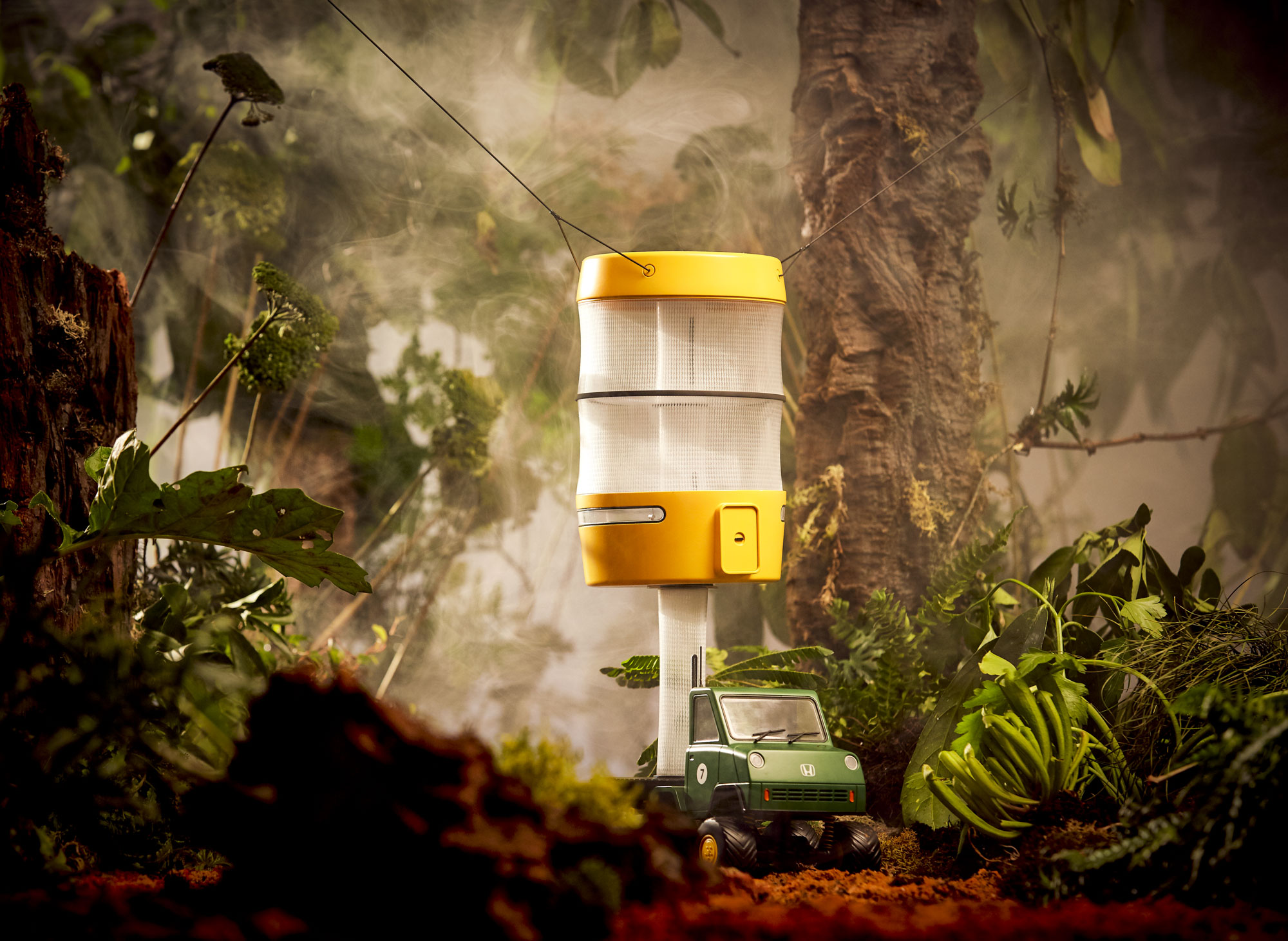 The final part of the journey takes passengers into the Amazon Jungle to Manaus. The terrain changes from tarmac road to dirt track and finally to thick jungle.

The vehicle is designed with two parts: a six wheeled truck with deep tyre treads that provide extra traction and a habitation unit which the truck, inspired by the HONDA T360, carries.