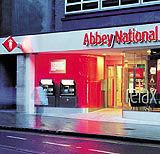 It wasn’t that the Abbey National brand had lost its way, rather it didn’t have a brand in the first place. That’s how Abbey National head of marketing communications Keith Moor sees it.

Incredible that a retailer occupying more than 700 prime sites should be able to operate in this day and age without a brand. But that’s the way it tends to be for banks, says Moor. Supermarkets have been most effective at inspiring loyalty through strong brand characteristics. Banks, on the other hand, seemed to rely more on apathy where customers are unable to summon up the energy to actually shop elsewhere.

Hence the good, but static sales – 15 million customers – since Abbey National’s conversion from a building society to a bank in 1989. But people are changing, even the mid-family types it sees as its core audience. ‘Sales were fine, but the consumer mindset was changing and we had to change our business model,’ says Moor.

As consumers were increasingly making emotional purchasing decisions, a strong brand had a better chance of influencing those decisions. And one that is customer focused rather than product focused was the push.

So Abbey National introduced a brand-led strategy in 1997, set up to have a three-fold impact: on the bank’s products and services, staff behaviour, and communications. ‘Our primary objective is to retain and increase the value of existing customers,’ he says.

Moor has spent the past two years trying to sort communications out with retail design group First, and his work is starting to bear fruit.

First pitched against Fitch, In Real Life and the incumbent Conran Design Group, initially just to look at store formats. This, Moor admits, was a naive brief, given the breadth of the eventual project. First is now at the front of the creative team, which includes ad agency Euro RSCG. ‘They keep us looking forward,’ Moor says of First, ‘It’s been a success giving groups that are strategic partners the scope to challenge.’

Abbey National put in place its own brand values of: more flexible, fairer, better value, easier to use, and more emotionally rewarding.

For the bank was in a time warp. The old logo featuring the 1950s-style couple – him besuited and in front, her slightly smaller and sporting an A-line skirt – was seen internally as sacrosanct, though no one knew why. But it had all the wrong connotations for the new friendly Abbey National brand. In the past, there had been several failed attempts to get rid of the couple, says Moor. This time, with First’s help, they were seen off.

Meanwhile, the stores themselves were likened in one focus group to something more akin to Warsaw in the 1970s. And given the plastic plants and general atmosphere of institutional gloom, it seems like a fair description. ‘The branches took up negative space on the high street,’ adds Moor.

All this was to change with the opening of the first fully redesigned store in Croydon, in December 2001.

Innovations included a branded coffee bar, welcoming reception area, zoning to mark out the customer journey, and touches like a single magazine instead of 150 leaflets, cosy lounges rather than interview rooms, and fresh flowers. ‘We have to be brave enough to try new things, in the way that retailers do,’ says Moor.

The introduction of Costa Coffee was an attempt to change perception and boost footfall. There are now nearly 20 reworked branches with Costas.

And the combination of the brighter stores with the coffee offer is having a significant effect. Not only are the cafÃ©s profitable (although Moor won’t reveal figures), but the branches are benefiting.

As a rule, people tend to look away when they pass a high street bank. However, research shows that the number of people noticing the new Abbey Nationals has increased by 1922 per cent. And people are going in, too, looking around and using the bank. Research shows there’s a 40 per cent increase in bank account openings in the revamped stores.

Again, Moor is unable to give little away about the financial returns of all these changes. ‘We had to have a target for payback, and we are significantly ahead,’ he says.

He does make the point, however, that the new customers are in the bank’s target group. And that in qualitative research customers think that service, courtesy and respect have all improved. ‘Now we want to take on the big four [banks].’

Not only is the redesign strategic, but so are the locations. There are 38 branches in Safeway stores, including Safeway’s first Megastore in Plymstock. And a branch has just opened at Homebase in Liverpool, which hopes to exploit the heavy footfall of home improvement customers. ‘We are trying to go where our consumers want us to go,’ he says.

This is the first such programme Moor has managed, and he is pleased with the progress so far, though admits some things could have been done better. For example, early on in the programme, they could have been better at telling customers why they were closing and when they were reopening branches.

He reckons they are about 25 per cent done, but already he has learnt a lot. ‘It’s taught me if my seniors say no the first time, I don’t let that put me off.’

And he is now less reliant on data to make decisions. Intuition comes into it, too. ‘You have to look ahead of the consumer mindset. I’ve been guilty in the past of looking at what customers say they want, rather than interpreting future trends.