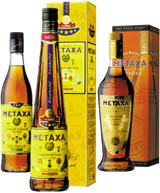 Claessens has created new-look labels for Greek spirit Metaxa as part of a six-figure revamp of the brand’s packaging.

The work, which launches in the UK in May, covers Metaxa’s three-, fiveand seven-star bottles and gift boxes.

‘Metaxa is rooted in the Greek culture and [the brand] is social, informal and full of life,’ he says. ‘The repackaging will help us to communicate that our brand is contemporary, but at the same time cherishing its Greek heritage.’

Metaxa international brand manager RenÃ© Laning says the brief for the redesign was to highlight the spirit’s Mediterranean character. ‘The labels now look more peaceful, less busy,’ he says. ‘The colours have been adjusted to look warmer and more Mediterranean.’

As part of the revamp the Metaxa family seal, brand medals and its Salamina Warrior logo have been repositioned more prominently to stress the spirit’s Greek heritage.

A new colour-coding scheme has also been introduced to help differentiate more clearly between the products.

The redesign applies to Metaxa’s labels across all of its 75 worldwide markets and follows a spate of revamps in the sector, including Black Tower and Mateus RosÃ© (DW 11 April).

Claessens was chosen to do the design work in autumn 2000 because of the group’s experience in spirits branding, says Laning. The consultancy refused to comment.