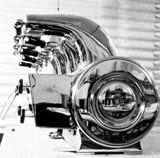 When a light aircraft crashed last week into Milan’s Pirelli Tower, sending shockwaves across Europe about a repeat of 11 September 2001, a bizarre thought fleetingly crossed my mind. Was this some crazy publicity stunt dreamed up by the Design Museum to promote its forthcoming retrospective on the Italian designer Gio Ponti, architect of Milan’s tallest building in 1956? Sick, I know, but the Pirelli Building is as synonymous with Ponti’s amazingly multi-faceted career as the 1948 Pavoni espresso maker or the 1957 Superleggera chair – and the coincidence of the crash was remarkable to say the least. (But then I don’t remember any geodesic domes being sky-bombed directly before the Design Museum’s Buckminster Fuller exhibition).

Any show on Ponti, of course, doesn’t need a suicide mission to draw attention to it. Ponti’s own design legacy will suffice. At a time when Milan is struggling as a world design capital to show that there is substance as well as froth in what the city produces, the portfolio of one of its most famous sons – Ponti was born in Milan in 1881 – is a reminder of what made Italian design great in the 20th century.

He was perhaps the key figure in that vivid era of post-1945 Italian design known as the ricostruzione when Italy rebuilt its shattered economy on the stylish and low-tech production of furniture and lighting. But he wasn’t just an architect and industrial designer. Ponti was a poet, painter, writer and stage designer. Even before the war, he founded Domus magazine in 1928, which went on to become the world’s most influential magazine of architecture, design and art.

What makes Ponti so special is the sheer breadth and scale of his work, a point which James Peto of the Design Museum, who has co-curated the show with Italian designer Marco Romanelli, readily acknowledges. ‘We intend to explore the bigness of Ponti’s career and explain what an extraordinary, versatile and energetic figure he was,’ says Peto. ‘We will try to give as complete a picture as possible and show something from all the different media in which he worked – textiles, ceramics, glass, furniture, architecture.’

The show will be largely chronological, reflecting Ponti’s remarkable capacity to reinvent himself every decade (it is hard to reconcile his decorative porcelain of the early 1920s with his starkly modernist lamps and furniture from the mid-1950s as the work of the same man). But there will also be the opportunity to compare and contrast thematic selections across time – the Design Museum has amassed all of Ponti’s sculptural cutlery in one place, for example.

Ponti was a renaissance designer in the best sense of the word, but he was a one-off. Peto believes that such a broad-based career embracing not just architecture and design, but the decorative arts and journalism, could not be sustained today.

Since his death in 1979, Ponti has given way to a newer generation of Milanese stars who owe him a debt. Now the Design Museum is set to revive his reputation with a blockbuster. ‘Ponti has faded in people’s consciousness over the past 15 years,’ says Peto. ‘He’s coming back with the current design interest in sensuality, decoration and the importance of surface.’ But not, presumably, low-flying aircraft.

Gio Ponti runs at the Design Museum in London from 3 May to 6 October.