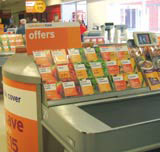 The traditional models of managing money seem to be gone for good; there’s a very good chance you’ve never met your bank manager. Instead, you can now borrow money and buy insurance from your supermarket, bank on-line and pick up credit and savings plans from a raft of providers.

In this morass of competition, banks are struggling to achieve standout and many are turning to design for the solution. Bradford & Bingley last week became the latest in a long line of financial services institutions to line up for a modernising makeover, appointing The Partners and Value Engineers to rethink its image (DW 18 August).

At the same time, certain banking brands are returning to a more traditional approach. Recently-appointed Barclays marketing director Jim Hytner has instituted a repositioning exercise at the bank, but has chosen not to interfere with the brand’s long-established eagle marque and strong, corporate typeface.

And Abbey, which is now sporting its third identity in the space of two years – after dropping the Wolff Olins-designed revamp just 18 months after its launch – has given up on its attempt to ‘turn banking on its head’ and has reverted to the corporate style of new Spanish parent company Grupo Santander.

The sector, it seems, is stranded between the desire to project an image of reliability and authority, and the perceived need to appeal to fickle, modern consumers.

Williams Murray Hamm director Richard Murray says there are benefits to projecting ‘traditional and other less sexy values’, which he believes are ‘reassuring in the banking world’. Having worked on branding for Barclays, Murray says he was aware that designs had to be ‘cognisant of the fact that Barclays is a financial expert’. However, this does not mean a ‘boring or predictable’ creative solution, he adds.

‘I respected Abbey’s bravery in doing something new [with the Wolff Olins logo] and I think the new Abbey logo is as dull as you like/ depressing and uninteresting,’ he says.

Finisterre managing director Sally Horrox agrees that tradition in itself is not a bad thing. The group has worked with Lloyds TSB and created the identity for Sainsbury’s Bank. ‘I don’t think [modernising] means you need to throw out everything [that already exists],’ Horrox argues. ‘People like a bit of heritage, it’s one of the reasons supermarkets have been so successful in the sector – consumers have bought into these brands since childhood.’

But she says customers today are ‘more adventurous’ in sourcing financial services products. Trust is becoming less of an issue, with convenience the biggest driver for many. Horrox believes the answer for banks lies in evaluating formats rather than brand revamps. It is her view that banks need to adopt a retail mindset. ‘Going forward ten or 15 years, there will be less need for branches,’ she asserts.

Lloyds TSB, she says, is ‘really gearing up and taking much more of a retail focus, calling branches “stores” and treating them in a retail fashion’. HSBC is understood to be working with Fitch on a similar project.

Murray also says the issue lies not with identity but at a deeper level. There’s a danger, he says, in thinking that implementing an identity update will be enough to shift perceptions. ‘Identity alone can’t do that,’ he maintains, ‘the changes have to be comprehensive too.’

• NatWest – launched The Partners-designed identity in 2003

• Egg – among the first to try an alternative branding approach, with identity by Brown Inc, updated by Wolff Olins in 2002

• Smile – the Co-Operative bank’s friendly face, designed by The Chase

• Zopa – billed as the alternative to banking, with branding by North

• Lloyds TSB – the Black Horse remains, though subsidiaries such as Goldfish use a more modern tone of voice and retail-style branches are mooted