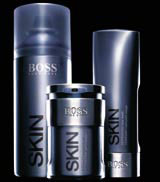 Hugo Boss this week launches Boss Skin, a men’s skincare range, with packaging and identity by Webb Scarlett deVlam. The consultancy was appointed to the work following a paid, competitive pitch against an undisclosed number of competitors.

The brand eschews feminine values, instead sporting a steel blue colour scheme and an ‘unapologetically masculine feel’, says Webb Scarlett deVlam creative director Tim Perry. ‘We’ve used the form – squat, strong and solid – to give it a masculine feel and included features like cut-away sides for grip, to create packaging that men won’t be afraid to shop [for] or to display at home,’ he says.

Perry says inspiration was found in the ‘purist qualities’ of German car design. ‘German automotive design exudes simplicity, performance and a certain masculine presence, which are the qualities we wanted to communicate with Boss Skin,’ he explains, adding, ‘men don’t like awkward, fiddly caps. With these products the closure is integral to the pack.’