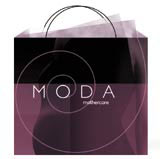 Mothercare has launched a range of fashion-led maternity wear called Moda, with an identity designed by Lewis Moberly.

Moda items go into stock in ten key stores from this month, including the group’s Marble Arch flagship, with a full national roll out anticipated by the end of the year. The range will be sold in a branded ‘shop within shop’ space, says a Mothercare spokeswoman.

According to Lewis Moberly creative director Mary Lewis, the identity is designed to ‘attract a more confident and demanding mum’ and features a deep aubergine colour palette and black and white graphics.

Lewis Moberly design director Paul Cilia La Corte says the group was briefed to create an identity that would reflect the ‘aspirational and fashion- biased’ direction of the brand.

‘There were two key parts to the brief,’ he explains. ‘The first was to create the idea of growth, and we were inspired by the nautilus shell. We also needed to create something that made the move into the fashion category and could, ultimately, stand alone in a fashion environment outside Mothercare.’

Lewis Moberly was appointed in October 2003, after a three-way pitch against undisclosed competitors.

The Moda range will encompass jeans and tops, along with lingerie designed by Elle Macpherson.

Mothercare has recently introduced a range of design initiatives, launching a Pentagram-created revamp of its core identity earlier this year, working with Fitch on concepts for its out-of-town superstores and with NB Studio on internal communications (DW 28 April).