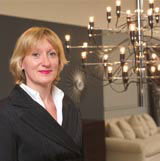 Business woman Andrea Warden, chief executive of furniture retailer Heal’s, is busy and by the looks of it has been ever since she joined in August 2004. Heal’s, a perennial in London furniture retailing, has inhabited its grand Tottenham Court Road premises for almost 200 years. But recently its offer has felt a little dated and the assertion that it remains dedicated to contemporary furniture seems at odds with its formidable premises and equally redoubtable staff.

‘We need to deliver a more contemporary view,’ Warden admits. ‘It’s 20 years since the brand had an update and research showed that people perceived it as having a stuffy and austere image.’

The products and store environment had become ‘too safe’, she adds. ‘Heal’s has become known for offering one look and style – classic, simple and plain. I want to offer more choice.’

In her quest for diversity, Warden is revisiting every aspect of the business, from product to positioning. She’s appointed design manager John Jenkins who, along with overseeing product design, has been tasked to work more closely with young designers through the Heal’s Discovers initiative, introduced by Warden, as well as build a relationship with the Royal College of Art.

The first fruits of this activity will see ‘more feminine and more glamorous’ products, reflecting changing fashions in home interiors, launching across the store in the autumn.

‘It’s a very clean, simple, easy to use logo that moves the brand on in lots of ways and will help bring consistency to how [the marque] is used,’ explains Warden. ‘We’re starting with a monochrome palette, but will introduce colour and pattern to match seasonal campaigns.’

Quotations, such as Bo Derek’s comment, ‘Whoever said money can’t buy happiness simply didn’t know where to go shopping,’ will be dotted around the store and advertising (by ad agency FCB) will target modern consumers’ shopping psychology.

One poster features an image of what could be a vase or decorative glassware and says simply, ‘I don’t know what it is but I want it’.

As well as giving the brand a major makeover, Warden is also launching Heal’s House, an entry-level offer with ‘a slight twist’ designed to broaden the retailer’s appeal and compete with brands like Habitat.

Warden has an impeccable retail pedigree. After a degree in history of art at Leeds University, she took a place on Marks & Spencer’s graduate programme rather than pursue the museum careers her peers chose. Museums were ‘too sedate’, she says.

After M&S there was a stint at Harrods, where she worked her way to head of home, managing 300 staff, before she was headhunted by Debenhams. She was promoted to divisional director for home at Debenhams and chose to move to Heal’s because she ‘wanted to be responsible for everything’.

Warden describes Heal’s as the ‘perfect job’. ‘It’s a great brand and a big challenge. I accepted the role because I knew it was a brand that I could do a lot with.’

She has wrought some very real changes in her first 12 months at the helm. The retailer, which has a portfolio of five stores, including its flagship, plans to open a further three across Britain and Warden is already thinking ahead to the company’s bicentenary in 2010.

All this from a woman who has a 15-month-old son, is in the second phase of renovating her home and says she only ever really switches off when she visits her family in Devon.

Warden is focused and determined – when asked to describe herself she says ‘relaxed’ before hesitating, smiling and acknowledging, ‘No, maybe that’s not the right word.’

‘I like to be inclusive and encourage people to speak out and inspire people to come forward and feel confident about their ideas. I like to challenge people,’ she says. And she clearly also likes to be busy.