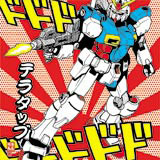 John Doffing is a man on a mission. It began in 2003, when he decided it was time to change the way art was delivered in San Francisco. Rather than using stale peanuts and bad wine to lure punters to art in hushed galleries, Doffing hit upon two ideas/ Start Soma, an art gallery dressed up as a club, and the Hotel des Arts’ Painted Rooms, hospitality more akin to exhibition space. So successful have they been that Doffing, an art enthusiast and hi-tech entrepreneur, has decided to broaden his scope and go global. With Start Mobile, launching this week, he aims to bring underground and emerging art to mobile device users worldwide. It’s a simple and compelling premise/ mobile users select the image they want, then pay $1.99 (£1.10) to download the image optimised for their device. It’s theirs to keep, licensed for single use. And for each download, the image’s creator receives at least 33 cents.

Doffing’s criteria for inclusion of art and artists was broad – artists from around the world, spanning street art to photography to abstract work to mainstream Pop art, were invited to submit work – because, he believes, the broader the mix, the greater the appeal of the venture. ‘I want the work to be eclectic, aesthetically meaningful, compelling, thought-provoking, interesting, fun and whimsical.’

His enthusiasm is persuasive, but there is scepticism from elsewhere. For instance, the Association of Illustrator’s on-line discussion forum cites issues such as tiny royalties, slow payment or non-payment in new media and, crucially, a lack of belief that people will pay to download images on to their phones. But Doffing is bullish/ ‘There are two billion cell phones currently in use in the world today, and they’re not all owned by 14-year-old boys! The images can be sold over and over again. And there is no limit to the art we can offer.’

East London street artist Adam Neate, one of Start Mobile’s illustrators, is equally enthusiastic. ‘It’s a nice opportunity to have my work pop up in some different media formats, although mine may not be as timeless and classic as certain loopy frog images,’ he jokes. And Jon Burgerman, another illustrator on board – a D&AD Silver Award Nominee who has worked for a wide range of clients – agrees/ ‘I see it as a good opportunity to display some new work on a fairly new format,’ he says. ‘Also, it means making my work available for download for American networks, which it hasn’t been before.’ 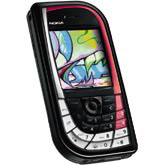 In a world in which print formats are contracting, this need to find new formats and markets is crucial for illustrators, and not just from a financial perspective, says Burgerman. ‘You need to be flexible enough to be able to adapt your practice for new outlets, otherwise you’ll miss out on opportunities and will ultimately be left behind. New formats and outlets throw up new problems, which can in turn drive innovation,’ he says. Neate agrees/ ‘The Internet has long since lost its Wild West image of entrepreneurialism. Things have levelled out and people have become wise to seeing what things work as strong and useful technology-based applications. Combining this with strong design and content can often make for a successful mix.’

If such formats drive the need for illustrators and artists to learn new skills, that’s no bad thing either. As Neate sees it, ‘A modern illustrator who can use Photoshop should have no restrictions in learning to use Adobe After Effects. Programmes like this can add an extra dimension and meaning to your work.’ And once you have the skills, you’re in the position to, as Doffing concludes, give people ‘compelling new art that can fit, quite literally, in a pocket’.

‘Art in this context is no longer atoms. It is not oil on canvas or spray paint on a wall. It is bits, ones and zeroes. The storage and display mechanism at this point is a cell phone, but in a few years, this could be linked to flat panel displays in the home. New art becomes increasingly fluid relative to how it is displayed, possessed, and enjoyed. This is pretty interesting stuff – at least to me.’

Looking at the wide and great range of work available at Start Mobile and then at the decidedly dull interfaces of most mobile devices, you have to agree with him.