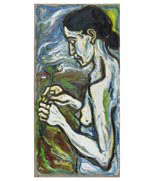 ‘Your paintings are stuck,’ Tracy Emin once declared about her boyfriend’s work. Billy Childish is no longer so close to the movement that’s proud to be ‘Stuckist’ in the face of BritArt condescension. Being incontingently creative, as this overview of his art, fiction, poetry and music attests, the man is hardly stuck in the productive sense; however, you can see why official taste-makers don’t rate him. A dyslexic former dock worker from Chatham who was expelled from St Martins College of Art and Design in 1981, Childish wears his ‘outsider’ status like a badge of honour. His paintings are a tangle of Van Gough, Schiele and Otto Dix. Authenticity is his watchword, and lately such types as Graham Coxon and the White Stripes have been digging the garage band, the Buff Medways. But is his art as impressive? I prefer the book covers and woodcuts, which recall early 1960s Everyman and Macmillan paperbacks. Yet, despite his canonisation as a Great British Eccentric, I wonder if Childish is too feverish, too much the Dave Pelzer of confessional painting?