UK-based human rights charity, the Equality and Diversity Forum (EDF), has changed its name and taken on a new brand design in a bid to represent how human rights “belong to all of us, equally”.

The new name, Equally Ours, comes from one strand of the charity, which is its marketing and communications division. The charity has three divisions, all of which previously had a separate sub-brand.

The Equality and Diversity Forum (EDF for short) was founded in 2002 and looks to promote equal rights through three activities – informing Government policy, conducting research, and spreading the word and campaigning (brand communications).

The charity looks to protect and improve people’s rights across a range of demographics, including ethnic minorities, disabled people, gender diverse people, people of different ages and religions, and those who are refugees and migrants.

Two of the EDF’s current projects include helping to prevent a loss of human rights and equality after Brexit and trying to prevent hate crimes and clarify jail sentences for those who have committed them. The charity also regularly defends the Equality Act 2010 and Human Rights Act 1998, which are UK-based laws.

The charity has ditched its former name to help clear up confusion and improve brand awareness and understanding, says a spokesperson at the Equality and Diversity Forum.

The new “Equally Ours” brand brings the organisation’s three strands of research, policy and communications under one unified identity, looks to better represent the general public and also aims to distinguish itself from energy company EDF (Électricité de France), which has the same acronym and has caused confusion in the past, adds the charity spokesperson.

The name was originally thought up by designer Annie Woudhuysen in 2012, and given to a cross-charity campaign to raise public awareness of the importance of human rights. 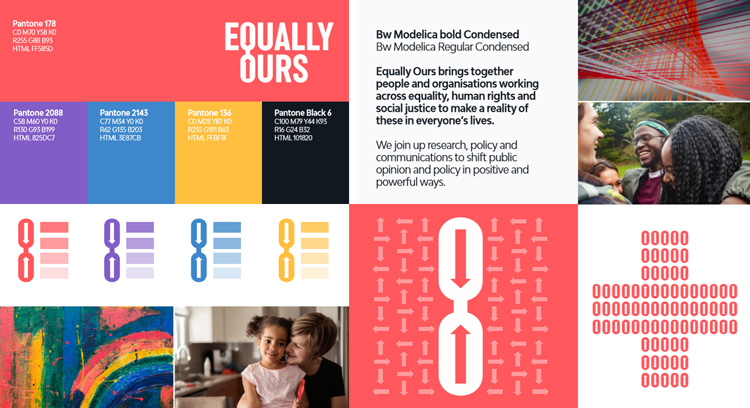 Helen Holden Design has created the new visual identity. The logo centres around the name “Equally Ours” set in all-capitals, sans-serif typeface Sugo Pro in a coral colour. The two words are stacked, with the “Q” in “Equally” and the “O” in Ours sitting directly on top of each other. The two letters have been joined into a combined lozenge icon and include two arrow icons pointing towards each other within their negative space.

“The arrows are used to convey the idea of two equal parts coming together,” says Helen Holden, founder at Helen Holden Design. “Within the logo, the two arrowheads meet, to visually represent a sense of unity.”

She adds that coral has been chosen as the main brand colour as it has “strength and authority” but is “softer and warmer than red”.

To the right of the logotype, sits the new brand slogan of “Equality and human rights for us all”, set in black, sans-serif typeface, Bw Modelica bold condensed. This type is also used for body copy across communications. 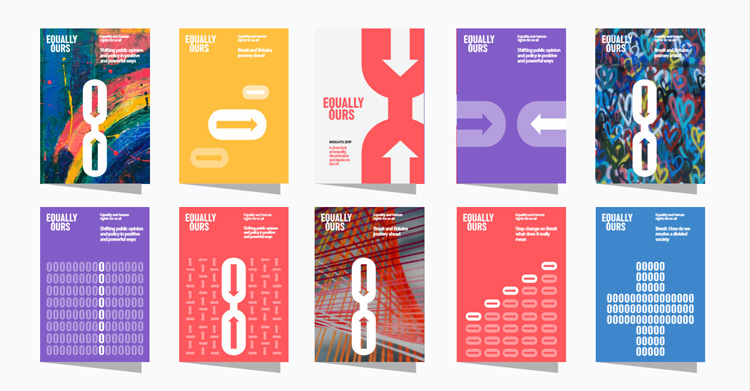 A secondary palette of purple, blue, yellow, white and black has been incorporated into the brand identity, and the arrow and lozenge icons have been used as graphics throughout, in the form of enlarged versions used to hold text, or several of them joined together to make large graphics, such as a “+” (plus) sign.

Using many icons together aims to symbolise a sense of “everyone”, says Holden, and indicate that many people are involved in the “momentum of change”.

These graphics are coupled with colourful, abstract photography of settings such as painted backdrops or street art, alongside photography of “real people and communities” who are involved with the charity in some way.

The main aim of the rebrand is to convey a sense of unity among people who work for and are represented by the charity, says Holden, and stress the point that equality is not limited to certain groups of people. 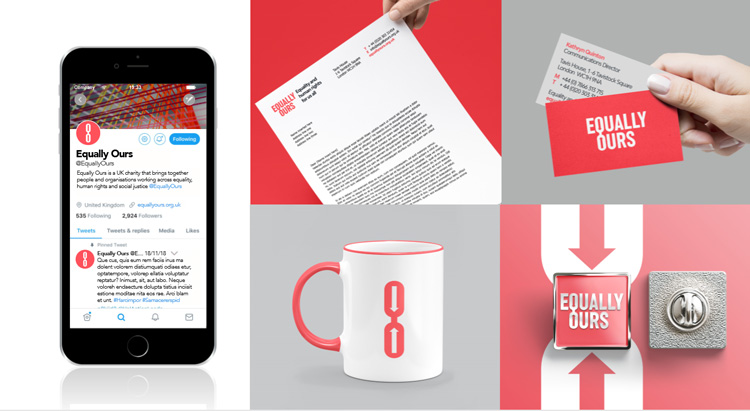 “We want to be more consumer-facing and show that a just and inclusive society — one that’s free from harm and where we can all contribute and flourish — is one for everyone,” she says. “Human rights belong to all of us, equally.”

The design project has taken eight months to complete and launch, and the new branding is currently rolling out across all touchpoints, including the charity’s website and social media, print materials such as reports, booklets and business cards, and merchandise such as t-shirts, tote bags, badges and mugs.

Is This Tomorrow? New exhibition delves into visions of the future