A new exhibition is celebrating the life of former Bauhaus student George Adams in a bid to highlight some of Britain’s connections to the Bauhaus in its centenary year.

The exhibition will take place at the Isokon Gallery, which is part of a residential building called the Isokon, which itself has strong links to the Bauhaus movement as it was home to some of the movement’s key figures, such as Walter Gropius and Marcel Breuer, who lived there in the 1930s.

Co-curator of the exhibition, John Allan, says while many other institutions have focused on the Bauhaus itself and on leading figures who emigrated to the US, the Isokon exhibition aims to “turn a spotlight on the British dimension of the Bauhaus story”.

Adams, a graphic designer who left Germany in the 1930s during the rule of the Nazis, spent much of his life in London, and after much travelling, he eventually settled in Gospel Oak near to what is now the Isokon Gallery.

He is credited among those who brought Bauhaus ideas and teachings to the UK, as well as to the other countries he lived and worked in, according to the gallery.

The exhibition will include a detailed biography of George Adams set out on a large panel display, put together by co-curators John Allan and Tom de Gay, along with visual examples of his work.

Adams was born Georg Anthony Adams-Teltscher in Vienna, Austria, in 1904.

During his time there, he designed an invitation to an exhibition in 1923 of students’ and teachers’ work.

Upon leaving the Bauhaus in 1923, ahead of its move to Dessau, he went on to become a graphic designer under the mentorship of graphic artist Julius Klinger.

He worked in Hamburg where he promoted a “modern design ethos” and later in Barcelona, Spain, where he became involved in the Spanish Civil War as part of the International Brigade unit, in which he is thought to have been a soldier.

He moved to London, England in 1938, ahead of World War Two, adopting the name George Adams, destroying his Austrian passport and continuing to work in graphic design. 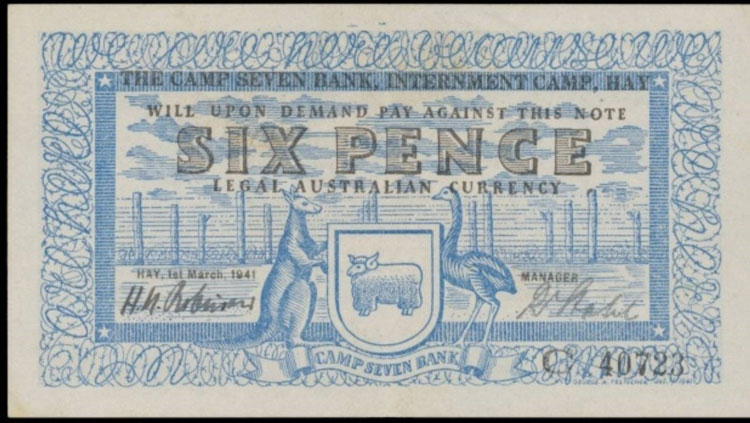 During WW2, he was deported to Australia, alongside many Jewish refugees who had escaped Nazi Germany, to Hay Camp in New South Wales.

Here, he designed toy currency — bank notes — which were used within the camp for various transactions for three months, before the plates used to make them were confiscated by the Australian government, because they were “so convincing in their design, they risked being used outside the camp,” according to the Isokon Gallery.

In 1941, Adams was able to return to England, where he drew maps for the British army and designed propaganda leaflets and later went on to become a British citizen.

He worked as a graphic designer creating hundreds of books and covers for publishers Thames and Hudson and producing designs for the Festival of Britain in 1951.

He also worked as art director for magazines Future and Go, and as a lecturer at the London College of Printing, which was known at the time as the London School of Printing and Graphic Arts, and is now part of the University of the Arts, London (UAL).

He was heavily involved with the 50 Years Bauhaus exhibition at the Royal Academy in 1968, which is where the current Isokon Gallery exhibition co-curator, Allan, met him.

“I was just a student at the time, but he was very friendly and approachable, so I still feel a sort of personal connection,” Allan says.

Adams worked as a graphic designer, for Massachusetts Institute of Technology (MIT) in the US, and moved to Nigeria in the 1970s, helping to start an arts department at the University of Nigeria.

Eventually he returned to London and settled in Gospel Oak with his wife Sara Adams close to The Isokon, where Walter Gropius had lived many years before. He died in 1983, aged 79.

His widow helped with the creation of the new exhibition, sharing Adams’ story with the curators and providing access to his archive of work.

“Adams made a significant contribution to the development of progressive design and pedagogy in Britain,” Allan says.

“Despite his remarkable life and work, George Adams is largely undocumented in graphic design histories: this exhibition aims to rectify that,” co-curator Tom de Gay adds.

Highlights of Adams’ work in the show, most of which will be displayed as photographs and printed on panels, include the invitation for the 1923 Bauhaus exhibition, the toy bank notes he designed in the camp in Australia, and some of the book covers he designed.

Original works in the show will include a Festival of Britain fold-out souvenir and an issue of the magazine Future along with some personal journals of his original work.

“The display is structured around the several distinct periods in his life; early life in Germany, the wartime years, post-war Britain and his later periods in the US and Nigeria,” Allan says.

“Adams was prolific, so the principal challenge has been choosing a selection of work which represents his vast and varied output,” de Gay adds.

The gallery, which was designed by Allan and Fiona Lamb of Avanti Architects, is based inside a converted garage and was opened in 2014, on the 80th anniversary of the opening of the original building.

The building itself, which is known as the Isokon or Lawn Road Flats, has long-standing connections to Bauhaus.

Opened in 1934, the building was considered to be at the “cutting edge” of design, with many of the flats catering for young professionals who had a mobile lifestyle and few possessions, according to the Isokon Gallery.

Bauhaus teachers Walter Gropius, Marcel Breuer and László Moholy-Nagy would go on to live at the flats for some time, with Gropius working for the Isokon Furniture Company that was set up alongside the flats.

The permanent display at the Isokon Gallery shares the building’s history, while an English Heritage Plaque was added to the gallery wall in July 2018, to mark Gropius, Breuer and Moholy-Nagy’s former residency there.

A book about the Isokon, called Isokon and the Bauhaus in Britain by Leyla Daybelge and Magnus Englund is also set to be released, and will be on sale at the gallery’s shop, as well as other retailers.