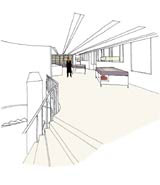 Wells Mackereth Architects is this week finalising interiors for the first standalone Pringle stores, due to open at the end of September in London’s Bond Street and in Tokyo.

The stores are part of the retailer’s move to position itself at the forefront of the luxury retail market following years of wholesale-only distribution and a rather traditional image, says creative consultant Valerie Wickes, who has been working with Pringle.

‘Because the collection is developing and moving into new markets, it becomes very important to have a retail space to sell the whole vision and experience of the brand,’ she says.

Wickes says Wells Mackereth was chosen for its innovation with materials, reflecting the Pringle strapline, ‘Be materialistic’.

‘The brand is in a major phase of change,’ says Wells Mackereth partner Sally Mackereth. ‘It is trying to shake off the Jimmy Tarbuck image. We don’t want to bang on too much about traditional Scotland as this brand has moved on.’

Much of the flooring and brickwork inside the stores is hewn from Portland stone, ‘reminiscent of the wilds of Scotland’, adds Mackereth, and is used in conjunction with soft linen damask.

Elsewhere, the ‘rough and raw’ surface of roach-bed works with cashmere, and sheet steel has been covered with buffalo hide.

The 418m2, two-floor Bond Street store, which used to house Armani, has undergone considerable reworking, including the installation of a staircase and a large fireplace. Prototyping work is taking place on fixtures and fittings.

The consultancy has been retained to design another store in Sloane Square next year and there are plans to open Pringle outlets in New York and Milan.

Putting on a show