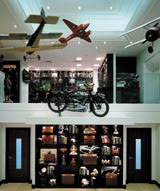 It was Shakespeare who said ‘clothes maketh the man’, but it seems the Bard’s advice is falling on deaf ears in the 21st century.

A Mintel research report released earlier this year found that only a small minority of men enjoy shopping for clothes. According to the report, almost 75 per cent of men are either ‘reluctant’ shoppers or actively ‘hate’ shopping.

Market analysis by Verdict last summer highlighted a similar trend. Men remain ‘needs driven’ in their clothing purchases and are likely to be distracted from clothes by ‘more interesting developments in technology, music, sports and leisure’, it says.

So how should designers working in the sector respond? What can be done to make shopping for clothes more appealing to the disaffected shoppers who make up this potentially lucrative market?

The group has worked on menswear solutions for many years, creating the original Selfridges menswear department over a decade ago and, more recently, redesigning Austin Reed’s flagship in London’s Regent Street (DW August 2003).

‘Men don’t want to work too hard,’ he explains. ‘Retailers need to make the space accessible and ensure men can see everything on display and take it in at a glance.’

The Mintel report advocates providing more ‘pleasurable, engaging retail experiences… [At present] there is not enough excitement to engage the male customer’, it says. Collis agrees that flagship environments can offer ‘bars, TVs and boys’ toys, which makes it a less miserable place to go and holds [shoppers] when they do get there’. But he believes store environments need to achieve a balance between cutting-edge cool and a more traditional feel.

‘It shouldn’t be a bland space for a bland bloke because these aren’t bland blokes. But they’re also not overtly exhibitionist and don’t want to be fashion leaders. Stores need to achieve that balance,’ he says.

Caulder says men want stores ‘to feel masculine, like a bar or club, but not over-designed or trying too hard’.

‘An over-designed environment is off-putting [to most men]. Interiors should be laid back and offer a more masculine environment that is a bit more chilled out and less in-your-face than women’s stores,’ he asserts.

The new Alfred Dunhill store in London’s Jermyn Street seems to have taken this advice to heart. A vintage 1962 Aston Martin sits in the front window. Nearby is a classic Norton motorcycle overhung by three model aeroplanes. A marble-floored humidor and barber shop – complete with three, old-fashioned, swivelling seats – comprises the store’s mezzanine level.

Alfred Dunhill director of image and communications Yann Debelle de Montby, who created the interiors with company chief executive Simon Critchell, concedes that the car, motorbikes and aeroplanes are shameless ‘toys for boys’.

But, he says, they serve a greater purpose in that they complement the ‘private club’ atmosphere that he and Critchell have tried to create.

‘That’s the feeling we’ve tried to build – that men can come here for a haircut, to have their nails done, to relax and have a cigar – and then, eventually, to buy a pair of cufflinks,’ he explains.

Fitch London creative director Tim Greenhalgh takes this approach one step further. ‘The days have passed when a shop is just a shop,’ he maintains, and advocates the creation of ‘mixed-use areas that bring the product to men in an exciting way’.

Greenhalgh proposes a bar that also sells clothing, where men can ‘flick through a catalogue, whether that’s a magazine or a digital solution’, while they have a drink.

‘Why,’ he asks, ‘can’t a denim store have a Sky lounge, where men can meet and watch football on Saturday afternoon?’

Greenhalgh cites the Armani store in Milan as an example of the way forward: ‘Four floors of beautiful product and a Sony centre in the basement where men can play with Playstation while they buy a shirt.’

It seems that if you’re wooing a male customer, subtlety, accessibility and a sense of fun win out over fashion every time.