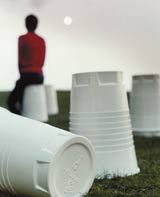 It started with Easter bunnies. Back in the 1920s, an enterprising chocolatier in the Netherlands created the world’s first rotational moulding technique to create a batch of hollow chocolate rabbits and product designers have been grateful ever since.

Rotational moulding (surely there must be a sexier term for the technique?) is the star of a fascinating hands-on exhibition which opens on Friday at Aram’s London showroom. It enables designers to create hollow plastic products. Think James Dyson’s early Ballbarrow, a wheelbarrow with a ball instead of a wheel, and you are on the right track.

Colourful plastic granules resembling sherbet are poured into a mould of any shape, which is placed in an oven and rotated until the melted plastic coats the sides, hardens, is extracted and, bingo.

The technology is loved by young designers and garden-shed enthusiasts as much as established names. The former are attracted by its low-cost, low-fi experimental nature, and the latter, well, for the same reasons.

The products on show at Rotations cover this spectrum. At one end are Tal Gur’s homemade moulds from aluminium foil and wire frame, from which he creates one-off plastic lights. He stumbled on the technique by chance while messing about with a Chinese takeaway dish. At the other end is Tom Dixon, who is said by curator Daniel Charny to have domesticated RM from its industrial beginnings in the form of salt grit bins and floating buoys.

Dixon designed his Tub chair for Eurolounge, followed by his well-known Jack and Star lights that demonstrate how well RM can develop unusual shapes. Alongside these, and guaranteed to raise a smile, are Rainer Spehl’s giant upturned coffee cup stools, called Qoffee and pronounced with a Sopranos accent.

The most radical piece on show is Ron Arad’s huge flowerpot for Serralunga. Air released through a plug in the centre fills the concertina-style sides with air and they rise up, elongating the pot. Elsewhere for Serralunga are Denis Santachiara’s plant pots, which look uncannily like terracotta and screw into the ground. Brilliant.

But perhaps the most interesting case study is that of farmer Robert Wyatt, who used RM to design his own calf-feeder and quietly started production himself when his manufacturer let him down. Under the name Wydale Plastics, he’s produced over 1200 models of the feeder and has even manufactured El Ultimo Grito’s public bench flowerpot for Nola.

The drawback is the time it takes to produce one piece – between 20 and 40 minutes, says Charny. Arad has addressed this with a prototype for manufacturer Cappellini, which creates two chairs from a single double-sided mould.

‘Rotational moulding is being rediscovered,’ says Charny, a passionate advocate of the form. ‘Its playfulness and low cost often give young designers their first break. Older designers like the fact they can intervene in the process mid-way and personalise their work,’ he says.

Charny has ordered a job lot of chocolate Easter Bunnies from the nice people at Lindt to sit alongside the products. They were only too happy to oblige: the rabbits are a tasty reminder of how far rotational moulding has come.

Rotations runs from 26 March to 29 May at the Experimental or New Work Gallery, Aram Store, 110 Drury Lane, London WC2B 5SG