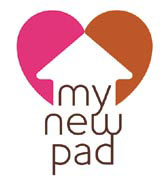 No-One has created branding for start-up property developer My New Pad. The work launches next week at the developer’s first site, Cockpit Yard in London.

No-One, which has been working on the project for six months, was appointed without a pitch on the strength of its previous work. The group’s work encompasses the creation of the marque and its application across a wide variety of print material, hoardings and signage.

According to No-One director of design Simon Manchipp, the marque moves away from a ‘prescriptive’ corporate identity and aims to ‘communicate across many levels’.

‘It means different things to different people. Some see it as a roof and arrow or a heart or two quote marks,’ he explains. ‘That’s useful for more permanent installations as people have to live with it and we didn’t want something they would tire of,’ he adds.

The brand also reflects the developer’s ethos of ‘craftmanship and creativity’, says Manchipp. ‘The theory that consistency is king is boring and to see an identity differently each time infers creativity.’

Lawrence will be hot to trot at Birdsong show