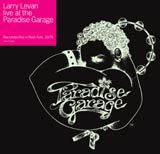 The club, which ran from 1978-89, was presided over by Larry Levan, “one of the first DJs ever to mix and develop a night out into a musical journey”, says Amp creative director Scott Parker.

The exhibition features a vast painted club scene and six Perspex up-lit cubes which contain original artefacts and memorabilia from the club.

Amp also designed the album, to be released on the night by Strut Records. Its outer slipcase has a glow-in-the-dark logo and type set against a high gloss black background. “This reflects the simple and raw feel that these original clubs had, a no-messing policy of good music and sound systems,” Parker adds.

Amp was formed by Parker, who was previously Ministry of Sound head of design for four years, and Rachael Hamilton, formerly creative manager at Intro.

Other Amp recruits are John Siddle, previously at Form, Tom Lardner from Ministry of Sound, and Tim Berry, who used to work at The Attik.