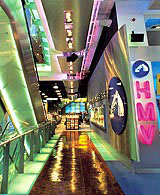 HMV has replaced its original central London store at 363 Oxford Street with a new three-storey building opposite.

London design group Greig and Stephenson has created the faÃ§ade, signage and interiors of the new 2790m2 outlet, which opened last Thursday and will accommodate over 200 000 music titles.

An exhibition including photographs and artefacts from the group’s archive will also feature in the new store.