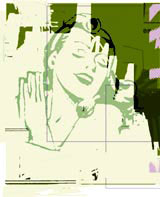 Who knows what will happen to packaging when, or if, on-line shopping takes off. At the moment, despite the frenzy of hype, in real terms Internet retailing is barely a blip on the radar. Yet visiting an on-line shop is a very good way of finding out how important packaging is. As Fitch associate director David Roberts puts it: “You never realise that there are so many different types of wholemeal bread.”

The on-line catalogue shows that the role of packaging in communicating practical information and brand imagery is as important as ever. In many cases, it can be more significant than the product it contains – as was illustrated vividly last month when Richard Finn, former chief executive of the English perfume house Yardley, gave evidence to an industrial tribunal. “The products are worthless. The value is in the name,” he explained. “You can get any contract manufacturers to make them for you. They are two-a-penny.” In fact, according to Which? Magazine, a £30 bottle of perfume contains about £3 worth of perfume and £10 worth of packaging, the rest is the retailer’s mark-up and the company’s profit.

In very competitive sectors, design’s role is all-important. The beer market is filled with fairly low-quality, mass-market produce – particularly at the bottom end, which is defined as having an alcohol percentage of less than 4.5 per cent. Hence the need for such aggressive advertising and the importance of beer’s packaging, both of which rely heavily on the beer’s origin. It was exactly this that led brewer Whitbread to create a new brand based on British provenance.

Somewhat bizarrely, Whitbread’s director of marketing Sophie Spence says the newly-launched GB beer, was a response to the fact that “younger British drinkers were being poorly served by existing brands and there wasn’t any brand that was speaking to them in their own voice.” This seems a little like saying rich, upper middle-class drivers are poorly served by the luxury car market. However, Whitbread’s research indicated a market niche for a British lager, and that the younger British drinker had a sense of national pride based on “comedy, fashion and cultural identity”.

From this brief, Williams Murray Hamm created GB, with its car-sticker logo and chrome tap-shaped beer tap. GB beer has a relatively high alcohol level (4.4 per cent) and has been brewed to enhance its hops flavour, but design was near the top of Whitbread’s priorities. WMH wasn’t working within a budget – it was working to produce a finished product. Part of the success of GB will be the strength of its brand identity. “There’s no point cutting five or ten grand here or there,” says Spence.

The important part for Whitbread was to get the design right and for the designers to work well within the team. “The process has been really painless,” says Spence. This was partly down to the fact that WMH didn’t attempt to foist any “strategic thinking” on Whitbread. Spence continues: “I have a major issue with design companies that want to be strategists. I don’t want them to come in and reposition the strategy, which is what I think some of the more aggressive ad agencies and design consultancies are doing, because that’s not what they are paid to do.”

It is a view shared by Heinz, which has been redesigning its packaging, and this year launched a new salad cream bottle (opposite). A Heinz spokesman says: “I think we were looking for people who were very good designers and were sympathetic to the strategic requirements of the clients. Packaging is more crucial than ever and we wanted something on the shelf that was clear, simple and immediate. We think that’s something that Jones Knowles Ritchie has provided. The consultancy is aware of the strategic ambitions and the direction Heinz is following. It has been a very productive relationship.”

For brewer Carlsberg, the major factor in the new design of its Export lager was the cost of bringing it to the market. According to senior brand manager Alex Penman: “There has got to be a balance between cost and design. The starting point for us was ‘what should it look like on the shelf?’ Then, all the different cost parameters were based on the fact that this sector is incredibly price-sensitive, so it wouldn’t make good commercial sense to have an expensive product out there, because you just wouldn’t be able to compete on price.”

Carlsberg wanted a change in both the structure and graphic design of the Export packaging. The most important element was the bottle, which Whitbread believes is seen as representative of the brand as a whole. To help give it a contemporary look, it wanted to use a clear, plastic-based label rather than the traditional paper one, which meant that it was important for the design consultancy Siebert Head to really know about the production process.

“We were looking for someone who could make sure that whatever concept was presented to us was going to actually be achievable,” Penman says. “We put the onus on the designer to work closely with our suppliers so it could talk at a technical level to see what could be achieved. There’s a lot of gold used in the design which is very problematic, and it can often look a little bit dull on the shelf. That’s why we’ve been quite pleased with what has been achieved because what was presented to us in those initial design phases hasn’t been compromised at all.”

The choice of design agencies by both Whitbread and Carlsberg supports the assertion that “if you look at all the people who have rosters, only half actually work, otherwise it’s just a way to stop design companies phoning upÃ­” says Richard Watson, director at design selection service GDR. Both clients deliberately went for fresh blood. “They do have this philosophy of no compromise,” Penman says of the people at Siebert Head. It seems that as far as packaging is concerned, it’s the old-fashioned virtue of producing good design that fits the client’s brief which ultimately wins the work.