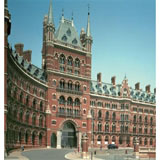 A team of designers is being assembled to re-envisage the Grade I-listed building located next to King’s Cross Station as a £100m five-star luxury hotel. The site, St Pancras Chambers, is likely to see future designers appointed in the field of graphics, furniture and landscaping.

Interior design consultancy GA Design International and lighting specialist Isometrix have already been appointed to create an interior and lighting concept for the scheme, but Harry Handelsman, chief executive at Manhattan Loft Corporation, the developer behind the ambitious plan, confirms that more designers will be appointed as the redevelopment programme progresses. This will most likely include a graphic design consultancy, and furniture and landscape designers. The appointments are expected to happen next year, following separate pitch processes.

The hotel, which is being branded under the Marriott International Renaissance group of hotels, is scheduled to open in 2009. It will house 254 bedrooms, two restaurants, two bars, a health and leisure centre, a ballroom, eight meeting rooms and 67 new apartments.

The interior concept is based on a contemporary, open-plan scheme. It will include bespoke installations, designed to make best use of the large-vaulted interior.

‘We have to be highly respectful of the building’s heritage. We will mix the old with the new and use a variety of materials, such as stone finishes in the hotel bathrooms,’ says Su Ball, senior associate at GA Design International.

Isometrix is designing a ‘warm’ lighting scheme to illuminate the interior and exterior of the building.

‘We don’t want something cold or foreboding, and want to create an atmosphere that is cosy and comfortable. We will use some of the light installations that were in the building previously, but give them a modern twist,’ says Arnold Chan, founder of Isometrix.