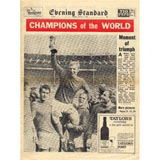 This week sees the launch of a competition organised by the British Library to redesign the newspaper.

Called Make the Front Page, the contest calls on entrants to come up with the newspaper of the future, either by designing the cover, taking the press photograph or writing the article that will shape the future of the daily paper.

‘The aim of the layout design category is to show how a newspaper front page could look in ten years’ time,’ says a spokeswoman for the British Library.

Aspiring newspaper designers have until 7 August to come up with their final designs – see the library website, www.bl.uk, for details. The winners will be named during the London Design Festival in September.

This week also sees the opening of the British Library’s Front Page exhibition, which features designs of front page covers from newspapers spanning the past 100 years. The show runs until 8 October.