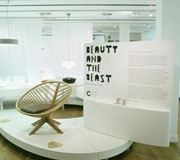 The Crafts Council’s exhibition space that gave many famous names their first break is no more. Pamela Buxton looks back and assesses its legacy

Who gave Urban Salon its first job, commissioned David Adjaye when few had heard of him and took a flyer on appointing Gitta Gschwendtner and Airside to design shows when they had no prior exhibition experience?

The answer is the Crafts Council, which, for the past 15 years, has commissioned four or five temporary exhibitions each year in its Islington headquarters in London. The designers read like a Who’s Who list of contemporary design – Thomas Heatherwick, the Azumis, Kerr Noble, Cartlidge Levene are among the other alumni who are now familiar names.

Sadly, the current show, Well Fashioned/ Eco Style in the UK, designed by Studio Myerscough, will be the last at the venue, ending a noble tradition of patronage for exhibition subject, curator and designer alike across more than 70 exhibitions.

A great deal of the credit for fostering such a diverse range of design talent should go to Louise Taylor, the former head of exhibitions and Crafts Council director who recently left after a decade with the organisation. Instead of having a conventional roster of experienced exhibition designers, she had a knack of spotting interesting and sometimes avant-garde new designers from a variety of backgrounds.

‘We were interested in new ways of exhibiting. One of the huge pleasures was hiring people who didn’t have the traditional background, but were interesting in their field. That’s what got the juices flowing on everyone’s part,’ she says. 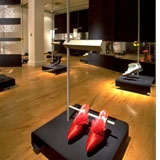 With budgets as low as £25 000, Taylor’s ‘calculated risk’ of hiring hungrier, less well-known designers made perfect sense at the Crafts Council.

‘People at that stage in their careers were investing a lot of time and energy. New designers came up with new ideas that were more experimental,’ she says, adding that the experienced installation team was an important facilitator for these fresh concepts.

These included Adjaye’s Tectonic in 2000. Based on the idea of a beach, this inset jewellery by Elizabeth Callinicos into the floor and the wall, instead of using conventional display cabinets. For the Flexible Furniture show in 1997, designer Katherine Heron used doors – some hinged, on the floor or wall, some as screens and so on, as an effective display motif. For Decadence, in 1999, Simon Costin turned the space into an opulent and glamorous den by draping black velvet around the walls, while Gschwendtner’s Industry of One in 2001 used gold leaf as a gallery partition.

Up-and-coming designers who benefited from the Crafts Council’s adventurous commissioning policy remain hugely grateful – Urban Salon won the commission to design the 1996 show Objects of Our Time just a year after leaving the Royal College of Art.

‘It was the project that got Urban Salon going. It set us on a particular path and we’re still doing exhibitions,’ says Urban Salon’s director of interior design Diana Cochrane. ‘The Crafts Council launched the careers of so many young designers and gave them an opportunity to learn about what exhibition design is all about. It’s a real shame that others won’t have that opportunity, because it really launched us.’

Gitta Gschwendtner had a track record – but as a furniture and product designer, rather than an exhibition designer. This proved no hindrance to being commissioned to design Industry of One, a show about designer-makers – the Crafts Council liked to hire designers who had experience of being the subject of exhibitions as well.

Used to more narrow-minded attitudes from potential clients who liked to see prior experience, Gschwendtner found the Crafts Council a refreshing change. ‘It was my first exhibition design ever and I’m totally indebted to the Crafts Council and Louise Taylor for giving me my first chance to work in exhibitions. They’re good at giving new designers the chance to prove that they can do it.’ She subsequently designed three more for them and now more than half of her work is exhibition design. Airside had a similar experience, gaining its first-ever exhibition commission at the Crafts Council for Knit 2 Together, a show about contemporary knitting held last year. For this, the group came up with very modern graphics to counter the common preconception of knitting as a homely ‘granny’ craft. As well as the graphics, it created woolly creatures for the launch and designed the actual installation with Mae Architects.

‘It was great that the Crafts Council gave us the chance. It certainly opened the door – we’re now doing the Pop Art gallery at the Wolverhampton Art Gallery,’ says Airside studio manager Anne Brassier.

For other more experienced designers, the exhibitions were great opportunities, not just with the curator, but the other designers involved. Ian Cartlidge of graphics group Cartlidge Levene particularly appreciated the chance to work closely with architects, such as David Adjaye, Urban Salon and Stickland Coombe, and has continued to work with architects, most recently with Allford Hall Monaghan Morris on the redesign of London’s Barbican. ‘The exhibitions were great little test-beds, always low budget, and you had to think of really ingenious ways of making the budget work for you,’ he says. 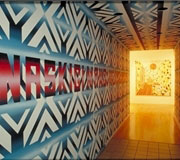 And, while the exhibition space itself may have been small and rather awkward, consisting of a large and small square space linked by a narrow corridor, in the hands of inventive designers, the results were always stimulating. ‘There was a special magic to it,’ Taylor reflects.

Hopefully, though, this isn’t the end of the Crafts Council as client – it hopes to form partnerships with other organisations to exhibit in different venues. It is planning Origin, a craft fair in London’s Somerset House, designed by Ben Kelly Design and Pentagram’s Angus Hyland (DW 18 May). Either way, its legacy continues in the boost they gave to the careers of the many designers it commissioned along the way. l