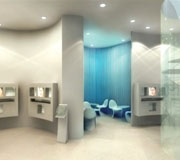 Dollond & Aitchison is evaluating the design of a £750 000 flagship concept store in London’s Regent Street, ahead of a nationwide overhaul of its 400-strong estate.

The 490 metre squared store is the result of two years of brand positioning, visual identity and interior design work by Hart D’Lacey. According to consultancy managing director Sam D’Lacey, it represents the first unification of all these elements for the optometric retailer.

‘We have rationalised and paired back the D&A brand. We are trying to change the negative mindset of customers buying glasses to a positive perception of how they can change their look or style,’ says D’Lacey.

Hart D’Lacey has redesigned D&A’s product packaging, staff uniforms and merchandising system, as well as the store interiors. The group also created the current identity, which launched in 2004.

‘Previously, stores have been split into retail and consulting areas, which were quite formal and a bit threatening. We’ve tried to break that down to create a less threatening retail experience throughout,’ adds D’Lacey.

The consultancy is working with D&A chief executive officer Andrew Ferguson to select elements from the flagship that will form part of a standard store design to be rolled out across the estate.