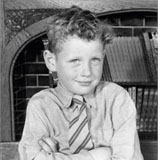 I was packed off to boarding school aged 11. My father had died suddenly in 1957 and my mother thought, as they did in those days, that it would be better for me to grow up with men around me. I was utterly miserable until, around the age of 14, I was put into a boarding house under the auspices of George Sellick – the template for Mr Chips.

A bachelor, with a past in the whore-houses of Egypt in World War 2, there was nothing George hadn’t seen. He hid behind the thickest spectacles I’d ever seen, smoked big fat roll-ups made from pipe tobacco that caused an earth tremor when they dropped on his pocket money list, and he turned a blind eye to everything that wasn’t really serious. We all loved him.

He once promised to cane me for smoking in the showers and I sweated all half term, only for him to deliberately forget.

He was always on my side and I learned from him the power of encouragement. He turned a blind eye to things that were petty and I learned to do the same. Most of all he respected us all, clever or thick, sporting or hopeless – we all had value. His legacy to me has been incalculable.

Designer of the Year goes to Hewlett