Byron has updated its visual identity, restaurant design and food and drinks offerings as part of a company-wide rebrand.

The new identity, including the interiors, has been designed by London-based studio Checkland Kindleysides.

The 12-year-old burger chain has struggled in recent years, owing to nationwide restaurant closures and a decline in popularity among diners.

“On a mission to bring people back around the table”

As part of this overhaul, Byron revealed an updated logo based on its new ethos: ‘All Hail The Table’.

It was created in response to this year’s Wellbeing Index, which reported that almost a third of British adults are eating alone “most or all the time”.

The black and white typographical logo features the five letters of the restaurant’s name around a rectangle, representing five guests at a table according to Byron.

Byron’s CEO Simon Wilkinson says that the logo is a “literal translation” of bringing people back around the table “to connect with each other and share quality time with friends”.

Byron’s site redesign builds on the idea of coming together to dine. At the chain’s original site in High Street Kensington, communal tables have been installed along with “social spaces for brunches”.

As well as an emphasis on group dining, there is also a focus on productivity in the redesigned space with “ambient sofas for laptop workers and working lunches”. 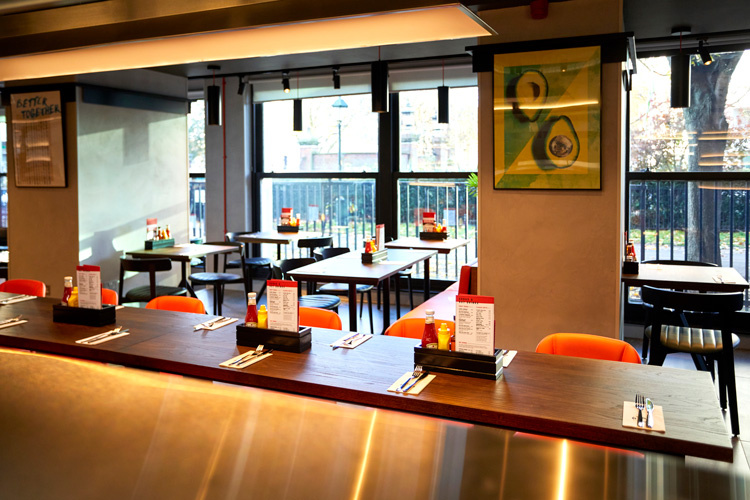 Byron will be updating their remaining restaurants across the country throughout 2020.

Taking inspiration from the west coast of America, the chain is launching a brunch menu available in the morning from Thursday to Sunday. It will include dishes like chicken and waffles as well as more traditional British fare like bacon sandwiches.

The restaurant is also trying to appeal to vegetarian customers with options like the veggie butty which uses grilled halloumi instead of meat, as well as targeting health-conscious diners with its new superfood grain salad.

Michell says that she hopes the menu will “breathe a new lease of life into” the brand: “It is so exciting to be witnessing a new era for Byron.”

As well as its ongoing financial trouble, Byron’s image has suffered after performing a widely-criticised “immigration raid” on its employees in 2016.

Workers were called into meetings, thinking that they were about the dangers of cooking medium and medium-rare burgers. They were actually being carried out by the Home Office as part of a clamp down on foreign workers.

Do you think Byron’s new identity and brand strategy will work? Let us know in the comments below.

“There’s a revolution on the horizon”: will virtual reality redefine amusement parks?